They are heroes for eternity and an indispensable part of the pop-cultural cosmos of this world: William Shatner, who turned 90 last Monday, and Leonard Nimoy, who would have turned 90 today, Friday, but died in 2015. Together they were the dream team of the Enterprise, flew with her as Captain James T. Kirk and Mr. Spock into worlds that humans had never seen before.

As close as their birthdays are, and even if both are of Jewish-Ukrainian descent, the two have always been so fundamentally different, also and especially in the roles they played on board the Enterprise. They were classic counterparts that scriptwriters invent to create more interpersonal tension on the screen. Because in TV or cinema, not only are the special effects breathtaking, but ideally also the psyche of the characters and their relationship to one another.

It was the same with Kirk and Spock. As James T. Kirk, Shatner embodied the captain of a futuristic spaceship, who always acted on the basis of human emotions, an often human aspect of his figure was deliberately placed in contrast to his first officer: Because Spock, the Vulcan, did not know emotions, she were completely alien to him, and he only made decisions on the basis of facts and reason (and raised his characteristic eyebrow – “Fascinating!”).

Up to the moon!

In general, you have to explore the environment in which this groundbreaking sci-fi series was created: “Star Trek” ran on US television from 1966, at a time when people were feverishly preparing for the first moon landing – the need for stories from the “Outer Space” was definitely there. So what could be more natural to send the most diverse characters from different planets together on a peaceful mission than troubleshooters clad in smart enterprise pajamas through the galaxy?

The Canadian Shatner and Boston-born Nimoy met when they were in front of the camera for an episode of “The Man From UNCLE” in 1964. Shortly after, Gene Roddenberry shot the first pilot episode for “Starship Enterprise”, but the one Patterns were a disaster. However, Roddenberry, the inventor of the “Star Trek” universe, was given a second chance: the condition was that he cast the entire series from scratch. Only Nimoy stayed on the original team. With Shatner as Captain Kirk and numerous other new appointments, the series was able to start again, but was discontinued after only three seasons – just in the year of the moon landing.

The cult came later: It was only when the series was repeated in the early 1970s that a rapidly growing fan base was formed and it was not until 1972 that “Raumschiff Enterprise” appeared on local screens under this title. Since then, the cult status has remained unbroken: William Shatner is still a participant in the “Star Trek” conventions, where fans can experience their stars up close. The sprightly 90-year-old also likes to do special events. For example, his well-booked fan meetings on the Star Trek set: the tour with Shatner costs 499 dollars, a selfie with him costs an additional 160 dollars. The autograph is comparatively cheap at $ 80. If you want to have dinner with Captain Kirk, you have to pay $ 1,500 for the “All Inclusive” package.

Shatner has never tired of being in front of the camera, still makes films today (latest work: “Senior Moment”), made a brilliant comeback with his role as Denny Crane in the lawyer series “Boston Legal”, and has made a brilliant comeback with “TekWar “authored a nine-part series of crime novels. His numerous music albums enjoy cult status: Shatner’s singing style consists of spoken words, which sounds like poetry recitation with musical accompaniment. It was not until autumn 2020 that he released the record “The Blues”, with guest musicians such as Ritchie Blackmore, Brad Paisley and Ronnie Earl.

Leonard Nimoy was also busy all his life – together with Shatner he once negotiated contracts with the “Star Trek” producers in order to get the best out of each other. Nimoy was just as creative as Shatner: at the age of 17, he financed his acting studies in California by selling vacuum cleaners. He also made music, recorded albums and switched to working as a director behind the camera: two of the later “Star Trek” cinema films were among his works, but also more unexpected ones such as “Three more men, one more baby” (1987).

Because of his parentage, Nimoy knew early on what it meant to be an outsider, and that was what he was for a long time as Mr. Spock. Too cool, too aloof, and precisely for that reason suspect cult. Then his Vulcan hand greeting with the splayed fingers, which, by the way, goes directly back to a Jewish ritual: Nimoy remembers a childhood experience in a synagogue in which prayers gave the Aaronic blessing with splayed fingers. It’s amazing how happy the “Trekkies” are today about this greeting, not knowing that it is based on a Jewish ritual.

Of course, there were also conflicts in the lives of the two: Although Shatner was the captain, Nimoy received much more fan mail than Mr. Spock, which made Shatner thoughtful. “I couldn’t handle that at all for a long time,” he says of his hurt ego.

In private, the two anniversaries quickly became good friends, a stroke of fate welded them together: When Shatner’s wife Nerine Kidd drowned in the hotel’s own swimming pool in 1999, Nimoy was Shatner’s comfort in his grief.

However, friendships are usually not far off in an industry like show business. “There you have an infinite number of friends on every film set,” Shatner once wrote. “And after the shooting is over, everyone loses sight of each other”. Not so in the case of Nimoy. “Before Leonard, I didn’t even know what true friendship was,” said Shatner.

Together, Shatner and Nimoy have created what is probably the most legendary space duo in film history – the series was followed by a total of six “Star Trek” cinema films that were made by 1991. While Nimoy appeared again as Spock in the “Star Trek” reboot of 2009, and also in “Star Trek: Into Darkness” (2013), “Kirk” preferred to hold back. For this he shot the documentary “The Captains”, in which he had in-depth discussions with all Star Trek captains.

The time as captain is over for him, but he remained true to the mystical, for example for the documentary series “The UnXplained with William Shatner”, which he shot for the History Channel. He is also one of the most sought-after guests on talk shows in the United States. When “Willie Shat” appears anywhere, the ratings are reliably top. A sprightly 90s that you wish for many years to come. As colleague Spock always said: “Live long and prosper”.

Self-learning playlist collects your favorite music of the year

Sven Sprangler: “I was too stupid to score a goal” 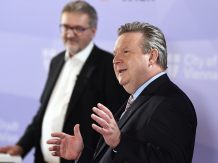 China versus the West: How China is silencing the free press