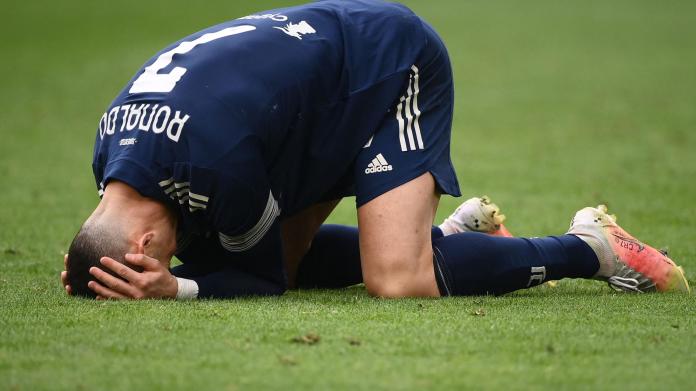 Fans, observers and friends of the club had remained calm around Juventus Turin for a long time. As a result of the – historically grown – trust in one’s own strength, the confidence was never completely gone.

Somehow this difficult Corona season could still lead to a good end. In the end you would get the curve. After all, you always got it.

After all, the old lady had become Italian champion nine times in a row since 2012. That is even more times than FC Bayern succeeded. Stand now. Participation in the Champions League wasn’t even a matter of form. It was just taken for granted.

Ronaldo a “preacher in the desert”: the media tear apart Juventus

But suddenly all of this is at stake.

In fourth place, Turin has eleven games before the end of the season, ten points behind Inter Milan, who are in first place. AC Milan and Atalanta have also passed. Naples and the Roma sit on the old lady’s neck.

You lose to relegation candidates, drop out early in Europe, qualifying for the premier class is in serious danger. And suddenly the alarm becomes more shrill.

“What can be seen at Juve is just confusion. When you see the team play, you don’t see that everyone is pulling in the same direction,” said club legend Alessandro Del Piero, expressing what many think.

Before that, the press had been tough on the club and team. The inexperienced trainer novice Andrea Pirlo also got his fat off. The former world-class player is heavily criticized.

Pirlo criticizes and gets support

But it really is that easy to make the 42-year-old solely responsible. Probably not, believes Pirlo’s longtime companion Del Piero. The 2006 world champion sees clear deficits on the part of the players.

“A lot goes wrong there. The players’ lack of concentration or the general lack of a clear understanding of what my duties are on the field makes me think. After all, to form a successful team you need more than just the sum of all the individual players – a mix of everything, different incidents, players, club, coach, talent. Only then do you create a unit. ”

The trainer himself also defended himself recently, pointing to a lack of attitude and the resulting individual mistakes. “There is little you can do about that,” said Pirlo and was backed by sporting director Fabio Paratici: “We continue to have confidence in Pirlo. We will continue with him.”

Nevertheless, after three quarters of his first season at the helm, the 42-year-old didn’t manage to meet the demands.

Juventus wanted to drive the upheaval with Pirlo with the resignation of master coach Maurizio Sarri last summer. Not only in the coaching position but also in the team. Gladly at a high level.

But Pirlo could never find a balance – especially in midfield. In particular, Arthur, Rodrigo Bentancur and Adrien Rabiot, who are planned as stabilizers, leave a lot to be desired in terms of performance.

The problems at the base of one’s own game settled more and more over all parts of the team over the course of the season. The uncertainty is now palpable.

If then superstar Cristiano Ronaldo – like last time – performs with fluctuations, the traditional Italian club wobbles worryingly and puts its own coach in danger.

“Pirlo was pushed into office by club president Andrea Agnelli. It was also taken into account that he is an absolute rookie in this position. That is one of the reasons why he has not yet been dismissed,” estimates Serie A expert Matteo Zorzoli from Eurosport in Milan on.

It is clear that Pirlo has to qualify for the Champions League with his team. Only then will he get the chance for a second season. But that doesn’t get any easier either.

The upheaval must and should continue. He even threatens to pick up speed because the situation around Ronaldo is anything but clear.

After losing to Porto in the second round of the premier class, rumors had picked up that the Portuguese could leave Turin in the summer – a year before his contract expired.

The discussion is not over yet. Nevertheless, the Juve side tries to ensure calm. Paratici made it clear: “We have decided to keep Cristiano Ronaldo. He is the best player in the world and he will stay with us.”

Pirlo was also confident. “We are happy that he can continue to play for us. He has scored many goals this season, so there is nothing to be doubted about him. Let’s finish this season first,” said the coach, who at least one left small back door open.

The “Corriere dello Sport” painted a somewhat gloomy picture. Ronaldo has already “resigned himself to a team that hardly supports him. It seems as if he is preaching in the desert,” wrote the traditional paper.

The cause should therefore remain exciting and take a turn until there is finally clarity.

But Ronaldo is still a Juventus player and will – as we know him – throw everything into the balance to bring his Italian era to a positive end.

Preferably together with Andrea Pirlo. Del Piero would also like that.

“Juve said that they want to continue with Pirlo in order to let a project arise. You support him – and why not? And let’s be honest, we have often seen that projects are successful after a less successful start.”

Maybe everything will be fine after all …

Pirlo counts stars: “If you don’t have the right attitude …”

Brandt, Meunier and Reyna: Not all crises are the same

Google may buy Fitbit – competition watchdogs give the green light

Coming out! Ellen Page now lives as a trans man...

PS5: This is the real reason for the console shortage

Disturbances on the U5 subway line