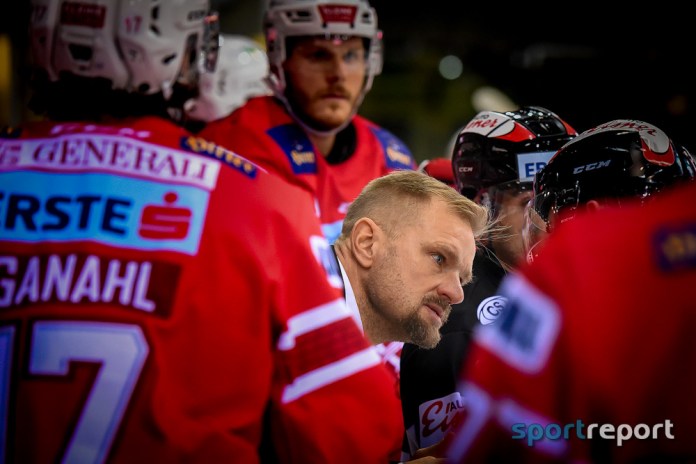 The eagerly awaited semi-final series between EC-KAC and EC Salzburg will kick off on Sunday evening in Klagenfurt.

THE KEY DATA:
In the first of up to seven semi-finals against EC Salzburg, the EC-KAC enjoys home rights on Sunday evening. The match begins at 5.30 p.m. and, as before, every play-off game of the Rotjacken (from 5.10 p.m.) will be broadcast by Puls24 on free TV as well as in the worldwide live stream on puls24.at/eishockey. Radio Kärnten also broadcasts directly from the town hall as usual, the Carinthian ice hockey magazine starts at 5:04 p.m. There are intense weeks ahead of both teams: Due to the upcoming Easter holidays, the entire semifinal series is clocked every two days.

THE STARTING POINT:
The EC-KAC prevailed in the quarter-finals in the first Carinthian playoff derby for ten years with 4: 1 against the EC VSV, the Klagenfurters, who started alternately in the post season, took control of this series in the final section of the third duel and then gave it up also not out of hand until the fixed promotion to the semi-finals. In the semifinals, the Rotjacken now meet a well-known opponent with the EC Salzburg, since the first introduction of playoffs in Austria’s top division (1973/74), the EC-KAC only played against the EC VSV (66 matches) more often in the KO -Phase of the championship on as against the Bulls (44 games). The season balance against the Mozartstädter is positive for Rot-Weiß (as well as against each of the other nine ICE competitors): Klagenfurt won two of the three encounters in both the town hall and in the Volksgarten.

In the quarter-finals against Dornbirn, EC Salzburg performed the feat for the third time in its history of winning a “best-of-seven” series 4: 2 after losing 2-0 thanks to four victories in a row. The Bulls face the Red Jackets for the eighth time in playoffs: both after series (4: 3) and after victories in individual games in the post season (23:21), the Mozartstadters are just ahead in the historical record. The form curve of Head Coach Matt McIlvane’s team has recently been showing clearly upwards, nine of his most recent twelve games have been successful. The six-time EBEL champion also won his last appearance in the town hall, but the 5: 3 away win at the end of February, which was fixed in the two final minutes of the game, was only the third Salzburg triumph in Klagenfurt in the regular season in the course of the last 14 guest games.

THE NUMBERS FOR THE GAME:
7 – The team-internal top scorer of the Rotjacken in season games against EC Salzburg was Thomas Hundertpfund with three goals and four assists, and the center forward had an excellent plus / minus rating of +8. Manuel Ganahl also collected seven scorer points, Johannes Bischofberger got six, Thomas Koch got five.
8 – The EC-KAC has won each of its most recent eight semi-finals across all seasons. In a semi-final game as a loser from the ice, the Klagenfurt team had to face EC Salzburg on March 17, 2017 (1: 4) in the home game. This was followed by four wins in a row against the Bulls (2017) and the Graz 99ers (2019).
8 – At eight, Thomas Raffl was actively involved in exactly half of the 16 Salzburg goals of the season against EC-KAC as a shooter or assist. He succeeded even though he missed two of the six duels due to injury. Rick Schofield, whose +3 balance is also the best of all Bulls players in confrontations with the Klagenfurters, also scored eight points against Red-White this year.
10 – For Salzburg goalie J.-P. Lamoureux, the Klagenfurt city hall is not particularly good ground: Since October 6, 2016, he has not clinched a win there as the starter of the respective away team. In four of his ten missions since then, he has been replaced early.
20 – In the course of the seven playoff duels between EC-KAC and EC Salzburg (a total of 44 games), no Redjacken player collected more points than Manuel Geier, who had 20 points (eight hits, twelve assists). Historically the best
The Klagenfurt team’s goalscorer in post-season encounters with the Bulls has been his twin brother Stefan, who has been able to write to nine times.
74.4 – Seasoned Thomas Koch was the most successful KAC center forward at the faceoff point in direct encounters with EC Salzburg. He won 59.1 percent of the targets he faced, and in faceoffs in the attack zone he even reached the fabulous quota of 74.4 percent. 600 – Captain Manuel Ganahl will play his 600th league game in Austria’s top division on Sunday. The native of Vorarlberg will be wearing the EC-KAC jersey for the 293th time. Since his first change to the red jackets in 2015, the striker has only missed a single EBEL / ICE game in Klagenfurt.

THE OPPONENT:
So far, EC Salzburg has played a solid, but not yet outstanding season: around Christmas it had three defeats in a row for the only time in the season, otherwise a success was achieved again after two consecutive losses at the latest. Overall, the Bulls’ winning percentage after 54 games this season is 57.4 percent, which is below the club’s average over the course of its league membership (60.9 percent). With 3.04 goals per game, Salzburg scored fewer goals this year than all other semi-finalists, and in the first playoff round (2.83) they were even below this mark. For this, the Mozartstadt team decided the quarter-finals against DEC with two shutouts in a row, goalie J.-P. Lamoureux has been without conceding for 120: 11 minutes.

The proverbial face of the Salzburg team has changed significantly in the course of the current season, since the first league appearance at the end of September, six new imports have joined the team, including the former KAC defender Stefan Espeland at the end of the transfer in mid-February. On the other hand, Daniel Jakubitzka and Layne Viveiros, who once had basic training in the red jackets, were two long-time Bulls squad players who were canceled.

After John Hughes had completed each of the last six seasons as a team-internal top scorer, center forward Rick Schofield is currently in the lead (17 goals, 29 assists), top scorer is Thomas Raffl, as in the previous season: the Villacher-born scored 22 of his goals five against the red jackets, he appeared as a goal scorer in each of his four previous appearances against the EC-KAC.

In total, EC Salzburg have faced Klagenfurt 144 times since entering the league in 2004, and the historic record speaks for the Bulls with 78:66 wins (469: 422 goals). In the Stadthalle, Salzburg won 31 of its 72 appearances, but four of its most recent six successes there were only fixed in extra time.

THE PERSONNEL:
At the EC-KAC, Martin Schumnig is returning to the lineup: The defender, who sustained an upper body injury in the away game in Bolzano at the beginning of March and therefore missed the last seven games, has been training again since the middle of last week and will start his twelfth on Sunday Post season in the jersey of the red jackets. Long-term injuries David Fischer (no season game so far), Paul Postma and Dennis Sticha (both out since mid-February) remain unavailable. In the first semi-final game, the squad from Klagenfurt consists of two goalkeepers, seven defenders and 13 strikers.

THE COMMENT:
“The semi-finals are finally starting. I think that there is no favorite in this phase of the season and generally in a play-off series between Klagenfurt and Salzburg, the condition of the day on the up to seven match days will decide. Whoever works harder in front of his own and the opponent’s goal, who also defends the blue line better, will prevail in the end. I am personally happy to be back in the lineup after the injury break and I hope that I can help our team accordingly. ”(Martin Schumnig, defender EC-KAC)

Many premieres in Formula 1 without world champions in Sakhir

More security for the city: video surveillance at the main station...

Shutdown in South East England – New Coronavirus Mutation: The Most...