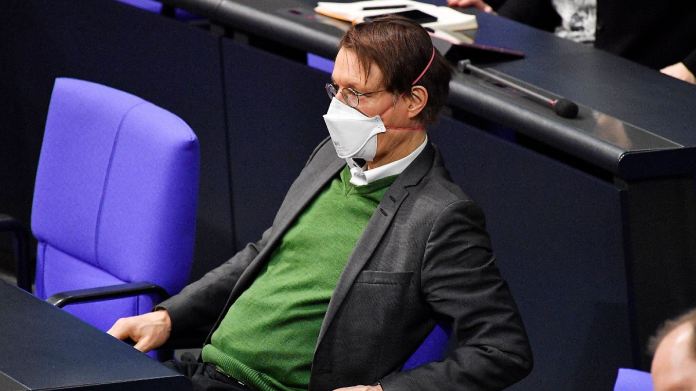 Karl Lauterbach in an interview
“For the most part, opening steps will never come”

SPD health expert Karl Lauterbach is concerned about the federal-state resolutions: Relaxations before rapid tests are available would lead to a “rapid increase in the number of cases”. Maxing out the vaccination intervals could save up to 14,000 lives, he says in an ntv interview.

ntv: The federal and state governments have agreed to relax. Are we heading straight for the next lockdown again?

Karl Lauterbach: I believe that the third wave cannot be averted in this way, which we have already got into. But the signals are very clear from yesterday’s decision: There should be easing, and the antigen tests that work against it will come much later. The opening steps contained in the paper are for the most part never implemented because the prerequisites for this – either stable or even falling numbers of cases – are never achieved.

Are there any further easings for Easter?

To speculate about it makes no sense. But I don’t think we will see falling case numbers or even stable case numbers in the next four weeks. We have to hope that these rapid antigen tests will finally be available in sufficient numbers. In this way we could make schools and companies safer and also lower the R value. That would really slow down the third wave.

The quick tests are not even there when the openings start. Isn’t that the wrong order?

Yes, because we are opening now and we will see a rapid increase in the number of cases. Unfortunately. And then we have to see that we can get this slowed down again by the antigen tests. But then of course that will be difficult. There is also the problem that the antigen tests may not be organized quickly enough because they are being sold abroad or on the open market. The strategy is therefore not yet certain.

From Saturday the discounters want to sell self-tests. How can you make sure that people behave correctly when the results are positive?

You can’t guarantee that, in fact! It is a danger. Here one can only appeal to the common sense of the people. We have to carry out tests that are documented. Which in the event of a positive test result in the health department being informed.

Speed ​​should now also be accelerated with vaccination. The second doses are no longer to be canceled, and the interval between the first and second vaccinations is to be extended. What is the point in your opinion?

That actually brings a lot. If we stretch the vaccination intervals, calculations by Dirk Brockmann, Ben Meier, Michael Hermann and me show that in this third wave, which is now starting, between 8,000 and 14,000 deaths can be prevented. People underestimate how many people live in danger of becoming seriously ill in the third wave. About 400 people are currently dying every day. When the third wave starts rolling, we will have completely different death rates.

No, it should definitely not be touched. We have to vaccinate the people who are at greatest risk first, otherwise we will have a very high number of deaths. What is not possible is for the general practitioners to decide for themselves who they would like to vaccinate. That mustn’t be, it must strictly follow the vaccination prioritization, especially the age limits.

US President Biden says enough vaccine will be available for all adult Americans by the end of May. When are we through with the vaccinations?

For that you would have to have a lot more vaccine. The EU has bought in such a way that we will not be able to supply the entire population willing to vaccinate with a vaccine until mid to late September. In America it goes much faster.

Europe’s transfer market is suffering from the corona pandemic

Gregor Kobel: A reliable player in the goal of VfB Stuttgart...

China’s flight to the moon: ‘A real dream destination’ for geologists...

Big earner with a heart: Ronaldo spends millions on the needy