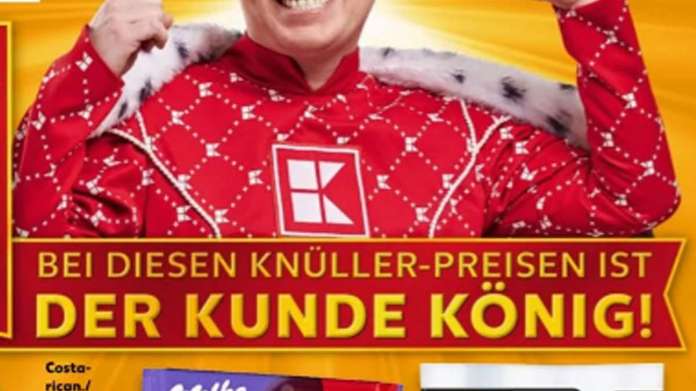 Kaufland had Michael Wendler, who was away from the window after a short time. Now there is a new advertiser – and some don’t like him at all.

Munich – brochures, discount campaigns, cheap offers, one-off products or, for example, advertisers. These are just a few reasons why people go to a particular supermarket. Whether it is close or accessible, sometimes you drive or walk a few meters further to go shopping in your favorite shop. In order to attract even more customers, Kaufland has now caught a special person. Not to the satisfaction of all customers.

Kaufland with Knossi: Some customers are quite angry

A potential customer rages on Twitter: “Will never go to Kaufland again”. Pretty drastic words when opening the brochure. Is that necessary? Another asks Kaufland directly: “Seriously?” The person who is now collecting money from Kaufland to use his face for the supermarket is none other than Knossi *, whose real name is Jens Knossalla. The 34-year-old became known through television.

In addition to his various small supporting roles in pseudo-documentaries, Knossi mainly attracted attention through playing poker. His final breakthrough came with his Twitch channel. On Twitch, gamers stream their computer or console game live and comment on them. Knossi was best known for playing poker as well as online slot machines. Knossi withdrew from the “machine game” – probably because of his reputation. Jan Böhmermann once bet against Knossi and the glorification of gambling and gambling addiction in Neo Magazin Royale.

In the summer of 2020, Knossi broke several records when he streamed a 72-hour fishing excursion live with Sido, among others. Knossi also brought out some singles and tried his hand at being a musician.

Kaufland thinks: “The outfit looks pretty good on him”

This is probably Kaufland’s attempt to win over young audiences and customers in particular. At least with some users, Knossi, who calls himself the “King of the Internet” and who often wore a crown in his streams, seems to be very well received as the “King of Kaufland”. “Just the real Knossi on the cover of the Kaufland prospectus,” commented someone on the picture of the streamer on Twitter when he saw the catalog. It remains to be seen whether Kaufland will be successful with the PR gag or not.

Amazon did not afford a PR gag, on the contrary. The corporate giant was suddenly associated with Adolf Hitler. Why? The design of an icon for an app caused a huge shit storm. (ank) * tz.de and ingame.de are offers from IPPEN.MEDIA

ProFans calls for a boycott of the soccer World Cup in...

Location in Winterberg on Sunday: The first free parking spaces are...

Soldiers and nervous residents – a change of power like none...

Hundreds of Britons disappear from the Swiss corona quarantine overnight

Corona: Round at “Maybrit Illner” falls on the head of the...