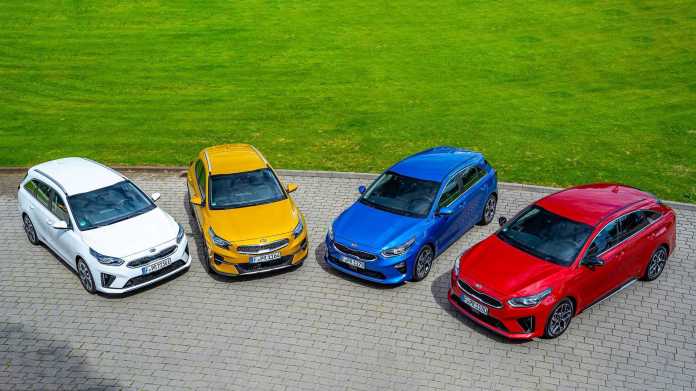 New year, new drives. This is also the case with Kia. The manufacturer is therefore now putting a new range of engines under the hood of the Ceed family for the 2021 model year.

According to Kia, the most important innovation is a 1.5-liter turbo gasoline engine, which replaces the previous 1.4 T-GDI and is the first gasoline engine in the Ceed quartet to be offered with a mild hybrid system. The 48-volt electrical assistance is optionally available for the versions with seven-speed dual clutch transmission.

The 160 PS strong 1.5 T-GDI is said to be more efficient and dynamic at the same time with a better power output (the predecessor unit had 140 PS). It is available for all four variants of the Ceed family: the Ceed, the station wagon called Ceed Sportswagon, the crossover XCeed and the Shooting Brake called ProCeed.

The new engine works most efficiently in the mild hybrid version. The Ceed with the addition of “1.5 T-GDI EcoDynamics + DCT7” has a combined consumption of 5.6 to 5.4 liters per 100 kilometers. It should be more economical than the previous model Ceed 1.4 T-GDI DCT7 (5.7-5.5 liters / 100 km) despite the better performance.

The top engine, however, remains the 1.6 T-GDI with 204 hp, which is reserved for the GT version in the Ceed and ProCeed and is available for the XCeed from the Spirit version. The wide range of drives continues to include plug-in hybrid versions of the Ceed Sportswagon and the XCeed.

The prices of the 1.5 T-GDI start at 22,990 euros for the basic Ceed model in the Vision version. Kia has raised the price by a moderate 600 euros compared to its predecessor. The starting price of the automatic version with mild hybrid system is 25,340 euros.

Biden calls Putin “killer” and threatens: “He will pay a price”

Corona in Offenbach: City tightened measures again – all rules at...

No medal for Austria in the team competition – gold to...