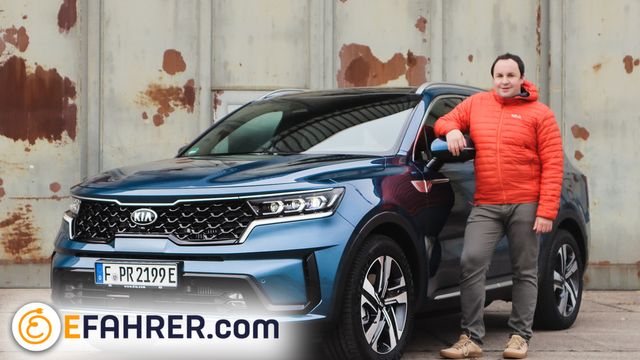 Kia launches a large plug-in hybrid SUV. On paper, the Sorento shines with full performance and minimal consumption. EFAHRER.com has tested how powerful and economical the Sorento PHEV really is.

Bigger, stronger, more luxurious: Big SUVs are the trend. But the trend towards more power, space and pomp is at the expense of the environment. SUVs with a combined drive consisting of a rechargeable battery for all-electric everyday journeys and a gasoline engine for long journeys are intended to solve the problem. These so-called plug-in hybrids often shine on paper with full power and fuel consumption like a motor scooter.

This is no different with KIA’s new, large plug-in SUV. The beefy Sorento rolls around the corner with 265 hp and all-wheel drive, but should only need a narrow 1.6 liters of fuel per 100 kilometers. For the hybrid drive, Kia combined a small 180 hp four-cylinder gasoline engine with a 91 hp electric motor. This results in a system output of 265 hp and 350 Newton meters of torque. If necessary, the front-wheel drive engages the rear axle.

This makes the plug-in hybrid the most powerful Sorento, but with its curb weight of 2,130 kilograms, it is by no means a sports car. After 8.7 seconds and some gasoline-powered blaring, the country road speed is reached. At 193 km / h it’s over. The plug-in lets the sluggish diesel with 202 hp and the weaker hybrid gasoline engine with 230 hp stand so loosely, but when cornering quickly, the overweight of the beefy hybrid SUV is noticeable and the Sorento pushes over the front axle. The comfortably tuned chassis matches the cozy character of the Sorento.

Kia states 1.6 l / 100 km and a power consumption of 16.1 kWh / 100 km. This should enable purely electric ranges of 57 kilometers. During the first test drive, we came up with an average consumption of around eight l / 100 km and an electric range of a good 30 kilometers. However, the internal combustion engine started up again and again in between. A real motorway stage was also canceled.

With a trick, KIA turns its van into a drift machine. A drift coach explains why e-cars are perfect drift machines and what …

With a trick, KIA turns its van into a drift machine. A drift coach explains why electric cars are perfect drift machines and what they need to achieve their breakthrough. The drift, i.e. the controlled oversteer in curves, …

The two-ton truck drives so efficiently

Motorway driving at a constant 130 km / h is the Achilles heel of many plug-in hybrids. On the long haul, they then often achieve consumption of more than 10 liters per 100 kilometers and are more inefficient than the diesel variants.

A controlled practical test has to show how well the Sorento PHEV can really keep its consumption promises. In the first impression, the Sorento PHEV is far above the standard specifications, but does not drive any more inefficiently than the competition from Mitsubishi Outlander PHEV & Co.

Unlike the Outlander, the Sorento takes a long time to charge. With just 3.3 kW, the Sorento sips from a type 2 wallbox. The 13.8 kWh battery is full again after just under three and a half hours. If you have around six hours, for example overnight or during work, you can fully charge the Sorento at home during this time.

To the range calculator!

On the hunt for the lowest consumption or the fastest sprints to the supermarket, three different driving modes help the Sorento driver.

As befits an all-wheel-drive SUV, the Sorento PHEV offers three off-road driving modes (snow, mud and sand) and can, if necessary, distribute its power variably between the two axles.

Premium interior and lots of space

The plug-in hybrid is already well equipped in the base for 53,940.00 euros and comes with extras such as 19-inch rims, full-LED headlights and the adaptive cruise control based on navigation data. Anyone who wants the good blind spot warning system, which adds a camera image to the respective round instrument when it flashes, has to go for the top version “Platinum” and add 8,000 euros.

Lane departure warning and cruise control work well in practice and are easy to use. The Koreans have not yet quite achieved the level of autonomy of the German premium competition.

Infotainment of the Sorento consists of a 12.3-inch virtual cockpit and the 10.25 display in the center console. Apple Carplay and Android Auto are on board as well as an app for remote control of the vehicle. A slightly silly extra that is reminiscent of the Tesla gimmicks: Upon request, the Sorento can play background sounds such as forest noises, the sound of the sea or the atmosphere of a coffee house.

On the other hand, the Sorento now easily competes with Volkswagen in terms of material selection and workmanship. Leather, aluminum and high-quality plastics rule the interior. There is also optional seat ventilation and plenty of space for up to seven passengers. Five of them have space like in a chauffeur limousine. The two seats in the third row of seats can be folded down for extra storage space.

In terms of trunk volume, the plug-in hybrid is in almost no way inferior to the diesel. The drive batteries of the hybrid variants are integrated into the vehicle floor below the front seats without significantly impairing the space in the interior. The diesel model with five seats holds up to 910 liters and the seven-seater with the third row of seats folded up to 821 liters. The plug-in hybrid creates 898 or 809 liters up to the lower edge of the window. With the seats folded down, a gigantic 2100 liters of luggage space are released. If you need even more space, you can optionally use the roof rails and the trailer hitch. The permissible trailer load is braked
with the plug-in hybrid 1,500 kg, unbraked it is 750 kg. The gross vehicle weight of the plug-in with trailer is 3,880 kg, for the seven-seater it is 4,030 kg.

The basic version of the Sorento plug-in hybrid costs around 54,000 euros. After deducting the state environmental bonus and any dealer discounts, the Sorento PHEV easily slips below the 50,000 euro mark. The Sorento is much cheaper than German competitors like Audi Q7 and BMW X5, but offers the same space and comfort. The consumption values ​​can also be seen at first glance. A practical test has to show whether the Koreans can really achieve ranges suitable for everyday use and how economical they really are on the autobahn.

TeslaThe Model Y is sold as an SUV, but it is not suitable for off-road use.

A couple of YouTubers made an interesting discovery near Tesla’s main plant in Fremont, California: They filmed a …

A couple of YouTubers made an interesting discovery near Tesla’s main plant in Fremont, California: They filmed a Tesla Model Y that had apparently been converted for off-road use.

Melania Trump is “disappointed and discouraged” after violence at the Capitol

Parliament dissolved: Israel is voting for the fourth time in two...

“Berlin Day and Night” (BTN): Sandy Faehse back on TV