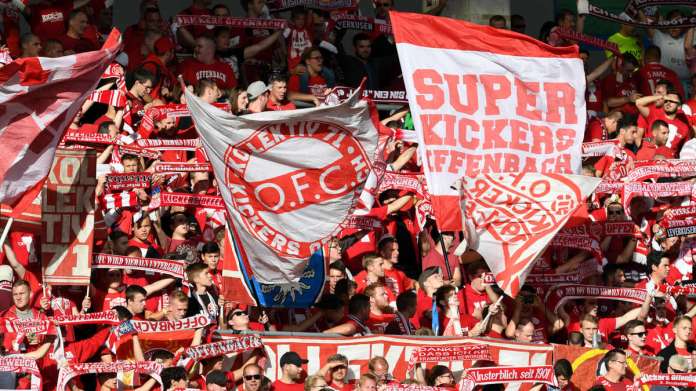 Kickers Offenbach meets Bayern Alzenau on matchday 29. The OFC wants to get three points again after the 1-1 draw against SC Freiburg II. We are there for you live!

29. Minute: Deniz beats Tuma, who is slowed down by Zabadne, demands a penalty. But that was fine. Go on!

28. Minute: The OFC stays on the trigger, takes two corners in a row. But Alzenau clarifies that.

25th minute: TOOOOOR for the OFC! Free kick after foul on Tuma. Deniz is ready and circles the ball exactly on the head of Elia Soriano, who brings the ball slightly back from five meters into the left corner. Great action by the attacker, who had already scored in the 1-1 draw against Freiburg.

23. Minute: Garic crosses to the left, but his flank sails over everyone.

20. Minute: Tunay Deniz loses the ball to Mehdi Mehnatgir 30 meters in front of the goal, who runs with the ball towards the goal, but misses the conclusion. Luck for Deniz, who looked really bad there.

17. Minute: Tunay Deniz takes out a free kick on the right. Firat brings the ball in – but then it gets strange: Deniz is in the fiver and “clears” the ball out of the goal.

14. Minute: Alzenau sometimes on the left, but Vetter brauburger brakes illegally. Free kick – and it was dangerous. Luca Bergmann almost got hold of the far post.

12. Minute: Quite intense duels in the game, the OFC is better, but Alzenau is doing all he can.

10. Minute: Nice attack by Kickers Deniz shifts to Firat, who sticks through to Vetter, whose flat flank is blocked.

9. Minute: Free-kick Deniz – and in the middle targetiecki heads on goal, Bilal Jomaa Zabadne has the ball with difficulty. Good chance for the kickers.

4. Minute: First attack of the OFC: Tuma prevails after a pass from Garic on the left, but his cross is blocked.

14 o’clock: The teams come out onto the field. The kickers in the away mint green.

14 o’clock: The referee of the game is Timo Klein (Kaiserslautern). The OFC was accompanied by around two dozen supporters, they are standing – corona-compliant – on a hill above the stadium – in the drafty wind that sweeps over Alzenau here. Wind? There was something …, in the most recent away game at TSV Steinbach Haiger, the Kickers had huge problems, which also contributed to their first and so far only defeat in 2021. Well, the Kickers will have learned a lot from that, right?

1.58 p.m.: The crews are in the locker room, final instructions follow. Then it can go. The OFC is of course clearly favored and wants to continue to participate in the title race. Alzenau has been waiting for a sense of achievement for ten games. But be careful, the last one was with front runner SC Freiburg II (1-0).

1:48 p.m .: In contrast, the kickers’ personnel problems read harmlessly. Goalkeeper Stephan Flauder has reported healthy again. Only Ronny Marcos is missing from the regular formation. The left-back has ankle problems. For him, Luka Garic will start for the second time this season.

1.45 p.m .: The coach of Lower Franconia is Fabian Bäcker, who stormed for Offenbach from 2012 to 2016 and won the regional league title in 2015. After the forced Corona break, the coach borrowed from Germania Ober-Roden has to improvise today. In Marcel Wilke and Marco Ferukoski, two ex-Offenbachers are missing, and veteran Kreso Ljubicic is not yet fit enough, all three trained individually on the next court today. The virus caught a total of ten players after the game at FSV Mainz 05 II (1: 2) at the beginning of March.

1:44 p.m .: Hello from Alzenau. The OFC is visiting the penultimate FC Bayern Alzenau in the stadium on Prischoss today. The hosts only returned this week from a two-week quarantine period after a corona outbreak.

Alzenau – Kickers Offenbach have to play on the 29th matchday of the Regionalliga Südwest at Bayern Alzenau. The OFC is in fourth place in the table with 51 points from 27 games before the match against the neighbors from Alzenau. Most recently, the team of head coach Sreto Ristic came to a 1-1 draw against SC Freiburg ll at home in Bieberer Berg. The game between the Kickers and Bayern Alzenau starts at 2 p.m.

Before the match on Saturday (March 27th, 2021), FC Bayern Alzenau is penultimate with 21 points from just 25 games. Because several players were infected with the corona virus, the upcoming opponents of Kickers Offenbach played their last league game on Saturday, March 6th, 2021. At 1. FSV Mainz 05 ll, Alzenau lost 2-1 at the time.

In the first half of the season, the OFC prevailed 3-0 against Alzenau at the Bieberer Berg stadium. Two times Bojaj and Sobotta scored the goals for Kickers Offenbach last October.

OFC: For Serkan Firat from Kickers Offenbach, the game against Alzenau is something special

For Serkan Firat, midfielder at Kickers Offenbach, it will be a reunion with his former colleagues: “Playing against my old club is always something special,” he said before the game against FC Bayern Alzenau. It was important to show a reaction after the game in Steinbach. “We did that against Freiburg. Except for the result, there were many positive things, and we have to build on that on Saturday, ”explains the 26 year old.

Sreto Ristic, head coach of Kickers Offenbach, knows about the strength of the opponent despite the different table situations: “Of course we have respect for Alzenau. Due to our opponent’s forced break from Corona, we do not know exactly which team will be approaching us on Saturday. ” In the three games that he saw, Alzenau was no worse than the respective opponent. (Melanie Gottschalk, Jörg Moll)

There were also easing at Christmas 1945