Three years after the birth of their first child, the two actors are expecting offspring again. Kirsten Dunst announced her pregnancy with a very special baby bump shoot.

After failed relationships with colleagues like Jake Gyllenhaal or Garrett Hedlund, Hollywood star Kirsten Dunst found happiness in her “Fargo” co-star Jesse Plemons. The two met on the set of the series in 2015, two years later the actor asked for the hand of his loved one. In May 2018, the couple’s first child was born, son Ennis.

Now the little one is becoming a big brother. Because Jesse and Kirsten are expecting offspring again, as the actress now made public with a glamorous photo shoot for the American “W” magazine. Wrapped in a long white lace dress, the 38-year-old poses gracefully on a bed. Your baby bump is already clearly visible through the transparent fabric.

Kirsten announced her first pregnancy in a similar way. At that time she was photographed by her close friends Kate and Laura Mulleavy for their label “Rodarte” in a flower dress in front of a romantic backdrop. This time, too, she wears a creation by the designer duo. The shoot for “W” magazine was staged by none other than star director Sofia Coppola.

When the baby should be born and whether she is expecting a boy again or this time a girl, the 38-year-old did not reveal. Kirsten never made a secret of the fact that she wanted a big family. “I’m at a point in my life where I say, ‘I’ve been working since I was three years old. It’s time to have kids and chill,'” she said in an interview with the UK in 2017 “Marie Claire”.

Market growth analysis for malleable earplugs from IT IT Sector Mack’s,...

Here the number of cases skyrockets

News from Germany: Police break service with more than 170 people

Change of timetable: What is changing for the railways in Thuringia 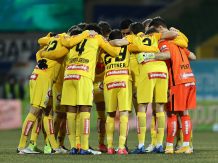 SV Ried against Austria Wien: The votes for the game –...