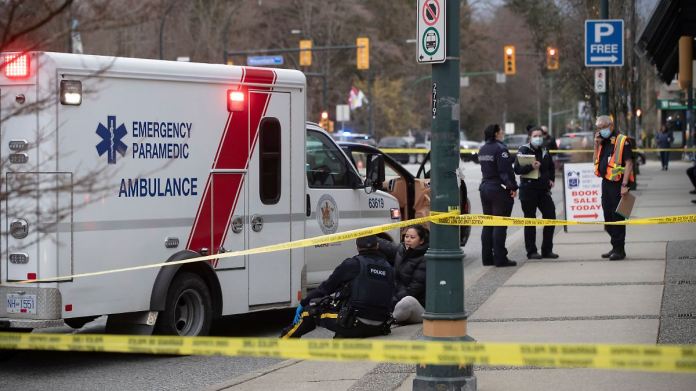 In the Canadian coastal city of Vancouver, a man known to the police attacks several people in a library. Why the suspect acted is unclear. One woman does not survive the knife attack and many are injured. A child is said to be among the victims.
A woman was killed and six other victims were injured in a knife attack in Vancouver. They had to be treated in the hospital, the police reported. According to eyewitness reports, the alleged perpetrator stabbed people indiscriminately in a public library on Saturday. He was later overpowered by police outside the library in the Canadian west coast city.

According to the investigators, they assume a lone perpetrator. The attack in a quiet, middle-class neighborhood of Vancouver shocked many residents. The police spokesman Frank Jang also called the attack “absolutely shocking”. The police assume that the man carried out the attack alone, Jang said.

The man had a criminal record and was known to the police. He has not yet been interrogated and his motive is unknown. Initially, the spokesman did not want to give names and further details about the alleged perpetrator. The suspect appears to have started his attacks in the public library and then continued around them.

Chase with the police

According to a video on Canadian broadcaster CTV, he stabbed himself in the leg at a traffic light before collapsing and being arrested by several police officers. An eyewitness had previously told the broadcaster CBS that the perpetrator had also been taken away in an ambulance after his arrest. The police fired at him with rubber bullets.

Justin Prasad, who works across from the library, shared how panic and chaos broke out around the library. The attacker was already “face to face with the police,” he said. “Then he ran away, the police followed him, cornered him and overpowered him.”

Andrew Cocking, who lives about 500 meters from the library, said he saw rescue workers taking care of the injured. “It was sad, especially since one of the victims was apparently a child,” he said. “It’s sad that these people were in the wrong place at the wrong time.”

Prime Minister Justin Trudeau said via Twitter that his thoughts were with the victims. Everyone affected by the violence should know that “all Canadians think of them and wish those injured a speedy recovery.”

More and more customers get into trouble

Ivica Olic will be head coach at CSKA Moscow

Frankfurt police officers are supposed to warn against vaccination