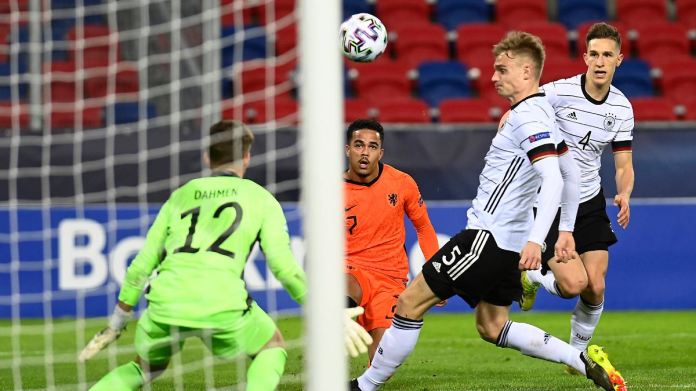 A nasty mistake by birthday boy Finn Dahmen (48th) had initially made it possible for Justin Kluivert to take the lead. The goalkeeper of FSV Mainz 05 hit over the ball, Kluivert suddenly stood in front of the empty goal. In the last group game against Romania on Tuesday, Germany only needed a draw to reach the knockout round for the fourth time in a row.

“We want to take a big step towards the quarter-finals today,” said Kuntz shortly before kick-off. Three days after the 3-0 win against co-hosts Hungary, the DFB coach switched to a chain of three, which initially had the heavily occupied Oranje offensive around Kluivert under control. Both teams started with a lot of respect for each other, there were no real chances in the first 30 minutes.

Prehistory between Öczan and Teze

As in the first half against Hungary, the German team lacked accuracy in the last third, with strikers Nmecha and Mergim Berisha (Salzburg) hanging in the air for long stretches. The Wolfsburg Ridle Baku, double goalscorer in the first game, hardly came into its own.

Shortly before the break, Dahmen was lucky on his 23rd birthday when a header from Dani de Wit landed on the post (36th). After the break, the keeper, who had only played one Bundesliga game in his career, struck after a throw-in over the ball. Kluivert was able to easily slip into the empty goal.

As a result it got hectic, after a foul by Salih Özcan on Jordan Teze it came to a pack formation. Both opponents have an explosive history: In October 2018 Teze spat in the face of the DFB captain after a U20 international match.

After all, the German team now seemed more alert and accepted the fight. A free kick by captain Arne Maier (55th) flew well over the gate, but the Kuntz team now pushed for the equalizer. Nmecha, who is now happy to run, aimed just next to the goal (67th), Amos Pieper (81st) failed against the Dutch goalkeeper. Nmecha managed to equalize late.

The vaccination in Berlin can start

Parallel competition as a carnival joke? – FIS admits: “It...

“Christmas is taking place!”: That is what the churches in Bavaria...

Augsburg: 28-year-old dies after an argument on the street