Pay for the new Tesla with Bitcoin? As of today, the electric car pioneer makes this possible. Critics warn, however, that Elon Musk’s enthusiasm for crypto is throwing too many unnecessary risks on the US company.

Since Wednesday, Tesla has also been accepting payments in the cryptocurrency Bitcoin when buying its electric cars. The option is initially only available in the USA, but will also be introduced in other countries in the coming months, as company boss Elon Musk announced on Twitter.

Musk makes for a record high

With his announcement today, Tesla boss Musk is keeping his promise from mid-March. At that time, he announced that he would accept Bitcoin as a means of payment for Tesla cars. With this, Musk fueled the boom in the cryptocurrency, which subsequently reached a record high at 61,782 dollars.

Musk had already caused a bitcoin hype in early February when he bought bitcoins for $ 1.5 billion. On the same day, the cyber motto climbed above the $ 40,000 mark for the first time.

Musk’s tweet on Wednesday also had an impact on the crypto market. In the morning, Bitcoin rose by about $ 2000 to $ 56,250. Other digital currencies such as ether also picked up in the middle of the week.

Meanwhile, some analysts warn that the Tesla boss could endanger the financial well-being of his company with his crypto engagement. Musk is taking an unnecessary risk in an industry that is already risky.

The risk increases with every Tesla sold and paid for in Bitcoin: Musk announced that it would not exchange the Bitcoin amounts received into traditional currencies. “Bitcoin paid to Tesla remains Bitcoin and is not converted into fiat currency,” said the multi-billionaire.

Fiat comes from the Latin word for “it will” – meaning money that is created by a central bank. Its value is not linked to a commodity such as gold and is based on the public’s trust in the respective central bank. Euros, US dollars and Swiss francs are known as fiat currencies.

The traditional currencies are also criticized by proponents of the crypto payment method as “penalty money”. In contrast to this, Bitcoins are generated by so-called mining by computers and are not controlled by any central authority.

In advocating Bitcoin, Musk could be keen to maintain his company’s reputation among a wealthy younger group of buyers. So is his crypto strategy ultimately a clever PR scam?

Tesla stock has become significantly more volatile since Musk entered the world of cryptocurrencies. The price fluctuations of the shares have increased noticeably since February. Many market observers suspect a causal relationship behind this.

Rapid after completing the compulsory task before the EL “final game”

Meghan Markle and Prince Harry in an interview with Oprah Winfrey 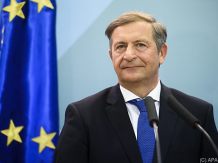 Motion of no confidence introduced against the Slovenian government – Politics...