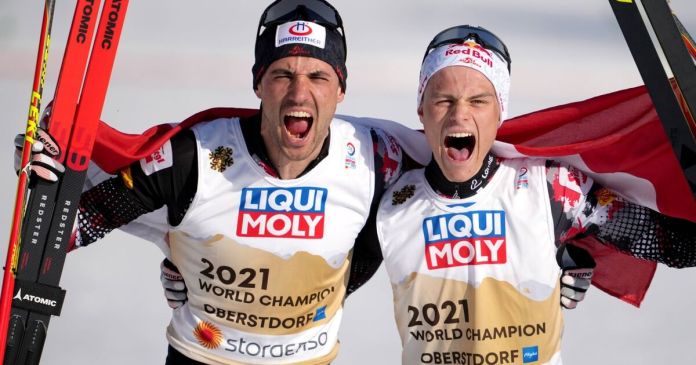 Greiderer, who is almost eight years older than him, was just as happy: “Unbelievable. I got everything out today. It became clearer from lap to lap that the Norwegians and Germans could not catch up. It burned unbelievably into the ‘Haxn’, simply Madness.” Greiderer only got cool just before the finish line. “I was nervous today from the morning until the last lap, where we still had half a minute ahead. I had to concentrate incredibly that I didn’t stumble on the deep descents. I don’t believe it yet anyway.”

Lamparter was delighted with the reward for the hard work: “When there are two of you and you can share gold, it’s the most beautiful thing there can be.” His teammate had to wait much longer than Lamparter for his first World Cup precious metal. “Yes, it took a little longer for me, with the first medal. That I’m going home from Oberstdorf with two people, with a gold one too, I wouldn’t have believed that before anyway. Better later than never.” With the bronze in the team competition, according to Greiderer, a ball got rolling. “We have a really great atmosphere in the team.”

The coaching team was happy. Jumping trainer Christoph Bieler was “incredibly proud of what the boys have done, I’m really a bit speechless. The way things have rocked up in the ski jumping area was unique – and of course it’s a more comfortable starting position. That people like it Have brought the goal is terrific. ”

Jochen Strobl, who is responsible for cross-country skiing, spoke of continuous work in recent years. “The people just grew. There are athletes who still have deficits in cross-country skiing, but the two of them today are very strong in terms of running and that makes me happy.” Head coach Christoph Eugen was happy about another “great team performance” and thanked the entire team, including the sporting director Mario Stecher: “He gives us a little spurs if need be.” In addition to his co-trainers, Eugen also explicitly mentioned the service team again. “They did a lot of testing before and didn’t leave anything to chance. You need that too.”

The addressed engraver cheered. “It’s just unbelievable what the team is doing. We got into a real flow. It takes good people, good coaches, good service people. At the moment everything comes together. We’ve had many years in Nordic combined where we’ve been in Cross-country skiing looked worse, it now seems to be very good again, “said the Tyrolean by choice from Styria. The ex-world-class athlete sees “a lot of self-confidence” in his team and a desire for more. “I am convinced that we still have a lot of young talents who want to get there.”

Lamparter / Greiderer entered the trail just two seconds behind the Japanese and overtook them in a very short time. From this point on, Lamparter and Greiderer ran away from the competition more and more. Before the ninth change, individual champion Lamparter had shown his current super form again and handed it over to friend Greiderer, who was allowed to fix the gold with his last ribbon.

With the fourth World Championship gold for the ÖSV team, the title fights in Oberstdorf are the second most successful Nordic World Championship for Austria after Oslo 2011 (7-2-1 / total 10 medals). Before the large hill team competition, Austria held the special jumpers in the afternoon with four gold and two bronze medals.

The whole world wants to go into space

Merchandise: Seated Bernie Sanders are now available as a sweater –...

Nobody needs this surface

Pocher with swipes against Klum and Wendler on ZDF show