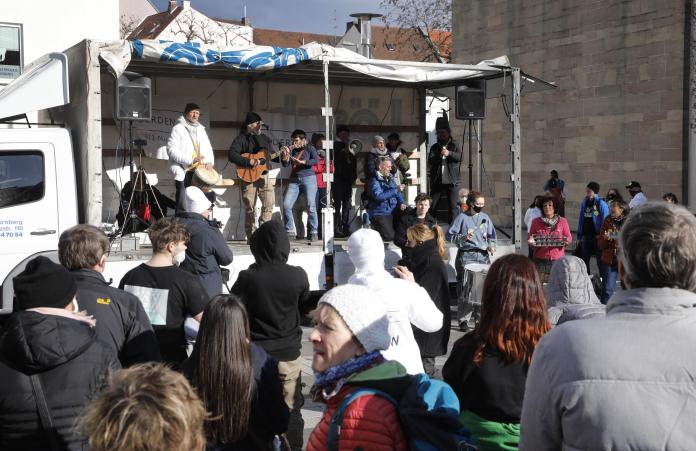 Rally against “deprivation of liberty” through corona vaccinations –
11 hours ago

NÜRNBERG – With protest songs and often without mouth and nose covering: On Saturday afternoon up to 550 people vented their displeasure with the Corona measures on the Kornmarkt.

“Peace, freedom, no dictatorship!” With the group “Samba One” singing and drumming, the critics of the infection control measures began their rally in downtown Nuremberg, which lasted several hours. “We cannot be immunized, our mind cannot be controlled,” said the first speaker from the Laufer “Schneckenpost” initiative. She criticized vaccination campaigns as “government rape” and “medical fascism”. The audience protested with chants “Söder must go!” and with posters against “vaccination apartheid”. Prominent actors in the scene did not appear this time – unlike, for example, in February.

They wanted to let people from Nuremberg and the surrounding area have their say, said organizer Bijanka Janusko. Like the trade unionist Roland Krollikowsky, who described the measures to protect against infection as “emergency laws without need”. “I’ve never hugged so many people as I did last year.”

“Lateral thinkers” in Nuremberg: Hundreds of Corona critics on the grain market

On Saturday, around 550 “lateral thinkers” and Corona critics demonstrated in Nuremberg city center – including sharp criticism, crude conspiracies and mask refusers. Some meeting participants attested to the police that they were exempt from wearing mouth and nose protection. The organizers initially ordered this group directly in front of the stage.

Another speaker described Corona as a blood alcohol disease because only 0.3 percent were infected. “The other 99.7 percent have to endure the measures.”

For example, the mask requirement, which is a thorn in the side of “lateral thinkers”. Nonetheless, at this demonstration, too, the regulatory authorities stipulated that mouth and nose covering must be worn within the marked demonstration area. However, a significant number of the participants appeared without a mask and were apparently able to credibly attest to their exemption from the obligation to wear police officers.
The city administration had previously ordered that these people must be separated in order to prevent a mix-up and to be able to control the mask requirement for the other participants by the police. The organizers of the movement “lateral thinking 911” therefore ordered the group to go to the front of the stage.

During a demonstration with around 20,000 participants on Saturday, there were clashes between the police, “lateral thinkers” and counter-demonstrators. Thousands of participants came together in downtown Kassel, although a court had only approved a gathering of a maximum of 5,000 people on the exhibition grounds. An unauthorized demonstration through the city was also carried out.

The organizers had fought before the Ansbach administrative court that they were allowed to meet in the city center and not, as originally ordered by the city of Nuremberg, at the Meistersingerhalle. A planned move through the city remained forbidden. The police, who were on site with a large number of officials, announced that they would also particularly check the arrival and departure of the demonstrators in order to prevent spontaneous marches. According to police press spokesman Michael Petzold, such spontaneous demos did not take place, the event, which ended at 6 p.m., was generally trouble-free and peaceful. However, an investigation is initiated against a person on suspicion of using incorrect health certificates. A total of 19 people have to answer for violations of the Infection Protection Act. 21 people were expelled from the site.

For hit in Cortina – Raich made Norway ace Kristoffersen fit...

Final spurt: Nina Bott is in the 40th week of pregnancy

The Unaccompanied Children’s March to the United States