This afternoon Spahn answers questions from citizens about the vaccination situation, rapid tests and other topics related to the virus via the Internet.

SPD health expert Karl Lauterbach demanded renewed corona consultations promptly in view of the sharp rise in the number of new infections. “We have to renegotiate again quickly,” said Lauterbach the “Tagesspiegel” (Saturday). “It will not work without a sharp lockdown,” he emphasized and defended his call for nationwide curfews. “Exit restrictions from 8 p.m. for two weeks would take effect – we’ve seen it in France, Great Britain and Portugal.”

“In general, too little is talked about the dangers in political Berlin,” criticized Lauterbach. “Far too little is said about the strength of the third wave, which age groups it affects and how dangerous the mutations are for the middle age groups.”

Lauterbach receives support in his claim from Christian Karagiannidis, President of the intensive care society DGIIN. In view of the rapidly increasing number of infections, he also calls for a tough two-week lockdown and immediate stop of all planned opening steps. “The resolutions for model projects after Easter are completely inappropriate and must be withdrawn immediately by the federal and state governments,” said Karagiannidis, who is also the scientific director of the Divi intensive register, of the “Rheinische Post” (Saturday).

However, there are now doubts about the safety of the much-touted rapid tests. “Antigen tests are nowhere near as safe as you think,” Lauterbach told the newspapers of the Funke media group. Studies have shown: “If someone is really asymptomatic, the rapid test works in six out of ten positive cases. The test is negative in four out of ten cases. ”

The virologist Jan Felix Drexler from the Berlin Charité warned users of rapid antigen tests to adhere to the prescribed storage and ambient temperatures when carrying out the test. “Even ten minutes at 37 degrees are enough for you to lose a lot of sensitivity, i.e. the question of how much virus you can detect,” said the virologist RTL / ntv. A Charité study led by Drexler has proven that. Drexler said that the temperature information on the instruction leaflet should be observed, especially on hot summer days. Otherwise, you run the risk of chains of infection that could have been prevented.

Explosive plans in Spain – anyone who does not get vaccinated...

Hungary is allowed to use Russia’s corona vaccine Sputnik V.

The best worst transfer of the season 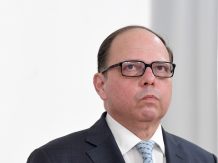 Griss: “Compulsory vaccination will be the only solution”