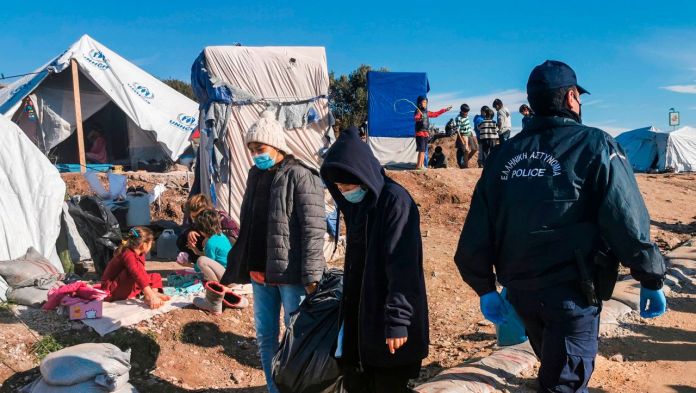 They spent the winter in tents just a few meters from the coast. The wind whistled through the tents, the people froze, the camp sank into the mud again and again. It snowed in January.

Almost 7,000 refugees are currently living in the temporary refugee camp on the Greek island of Lesbos, including more than 2,000 children. Aid organizations report of traumatized girls and boys who tear their hair out of desperation.

Actually, the warehouse is only intended for the transition, so no containers or even houses are built. An interim solution. The Moria slum camp burned down in September 2020, and a new camp should be ready at the beginning of September 2021, before the cold returns. A camp that should meet European standards, there should be heated containers, playgrounds and classrooms. At least that is what the Greek government and the EU Commission promised. No more ugly pictures should come from Lesbos.
But according to SPIEGEL information, the new camp on Lesbos will most likely not be ready in time. The refugees are threatened with another winter in the tents of the transitional camp.

A new warehouse is to be built next to a landfill

The new camp for refugees is to be built in the northeast of the island, a few kilometers from a landfill. A gravel road leads to the private property that the authorities want to rent. Vastria is the name of the area. There is still only one meadow here.

According to the schedule, the Greek authorities should have tendered the procurement procedure for the construction of the camp in December 2020. The government should have submitted the funding application to the EU by the end of January 2021 at the latest. A camp manager should be appointed by March. None of this has happened so far.
The camp will certainly be finished later, they say in Brussels. The frustration runs deep. A “gigantic sum of money” has been made available to Greece, and now it must finally start. The EU plans to provide 155 million euros for the camps on Lesbos and Chios alone.

The EU has simply not finished examining the funding application for the new camp on Lesbos, the Greek migration minister Notis Mitarachi recently opposed to a request from SPIEGEL. He also admits: At the moment it does not look as if the completion in September is a realistic one.

The main reason for the delay are disagreements between the Greek government and the EU Commission. Both have different ideas about what the new warehouse should look like.

Too many fences, too little education

The responsible EU Commissioner Ylva Johansson wants to build an open, humane camp. There should be an entrance control, but not a prison. Johansson speaks of schools for children “so that precious years are not lost”.

The Greek government of Prime Minister Kyrgiakos Mitsotakis, on the other hand, repeatedly speaks explicitly of “closed camps”. He was elected with the promise to bring order to migration policy. The closed camps were an important part of the strategy to calm the residents of the Aegean Islands.

A closed camp should not be financed by the EU at all, EU guidelines on refugee reception prohibit this. Internally, the Commission has made this clear to the Greek government. Too much emphasis is placed on fences and too little on education for children, it said. The authorities would have to improve.

Angry residents chased policemen off the island once before

But Mitsotakis is under pressure. Many voters on Lesbos do not want a new camp at all, only a slim majority voted after a long struggle in the decisive municipal council for a new “closed” camp on Lesbos. Protests took place again in February, reminiscent of the uprising a year ago. At that time, protesters chased police off the island to secure the construction of a new camp. The government wanted to turn Lesbos into a “warehouse for souls,” warned the demonstrators. The regional governor Kostas Moutzouris praised their militancy, he is a party friend of Mitsotakis.

Johansson is traveling to Lesbos on Monday to see the situation for himself. During her visit, she will continue to increase the pressure on the Greek government. The EU Commissioner fears that she will not be able to keep her own announcements from autumn. »No more Morias«, was the promise made by Johansson and Commission President Ursula von der Leyen. They praised the planned camp as a milestone in a new European migration policy, and an EU task force is checking the accommodation for the first time. Another winter with pictures of people looking for protection in the snow would be a disaster.

Before leaving for Greece, Johansson wrote down her thoughts in a blog post. Spring, she writes, is the perfect time to prepare for winter.

Weeping lacrimal glands from the laboratory

Why Bitcoin crashed so badly