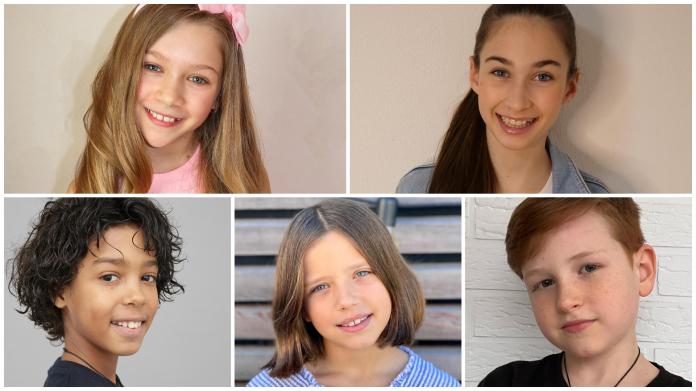 5 kids take on a big challenge

At the moment 14 celebrities are fighting again for the title “Dancing Star” in “Let’s Dance” – but soon kids will also face this challenge. In the TVNOW original “Let’s Dance – Kids”, five celebrity children compete against each other and become mini-performers together with young dance coaches. They are supported by popular “Let’s Dance” professional dancers. Here we show who takes part and how the four-part show works! And of course the well-known specialist jury will also be there. How much the jury and the parents of the kids are looking forward to the show is shown in the video above.

Dancing for the title “Dancing Sternchen 2021” starts on Friday, April 9th, 2021 on TVNOW. There are four shows, each with their own exciting motto. Victoria Swarovski and Daniel Hartwich will moderate the episodes of the TVNOW original, and Joachim Llambi, Motsi Mabuse and Jorge González will judge the mini-performers’ dance duel. How strictly will Joachim Llambi judge the little ones and which juror will be moved to tears? The standard or Latin dances are rated as usual with points between 1 and 10.

And these are the kids who are there!

Angelina is in the sixth grade of an international school in Munich and is the daughter of presenter and actor Alexander-Klaus Stecher and entrepreneur and television presenter Judith Williams. The 49-year-old was a candidate in the 11th season of “Let’s Dance” and took second place with Erich Klann.

Now Judith Williams is really happy for her daughter: “At ‘Let’s Dance’ I was able to learn so much personally and at the same time every challenge was so much fun. I wish Angelina the same joy.” By the way, the eleven-year-old is already passionately recreating various dances on TikTok and is also familiar with beats and rhythms because she plays guitar and piano.

Spencer is in fifth grade and lives with his parents and six-year-old brother in Hamburg. He became known for his role as “Olufemi ‘Femi’ Okoawo” in the children’s and youth series “Pfefferkörner”, which has been running in various casts on the children’s channel of ARD and ZDF since 1999.

“I take part in ‘Let’s Dance Kids’ because I want to gain experience and because I would like to learn how to dance properly.”

Jona is in the third grade of a community elementary school and lives with her parents in Cologne. She will soon be a big sister because her first sibling is born. The ten-year-old has already gained experience in hip-hop dancing and in the ballet studio and also does gymnastics online three times a week. “Let’s Dance Kids” fits her like a fist in the eye: “I love dancing and look forward to the shows, the great costumes and lots of fun. Of course I’m a little excited too.”

Eight-year-old Maris is in the fourth grade of elementary school and is the son of actor Erdoğan Atalay, who has made a name for himself primarily through his role as chief inspector Semir Gerkhan in the RTL series “Alarm für Cobra 11”.

Maris has never been on a big stage and that’s exactly why he’s so happy to be part of “Let’s Dance Kids”. By the way, he likes to watch “Let’s Dance” with his mom.

The world of dance is not entirely new to him, because in addition to football and boxing, he also dances in his free time. His greatest role model is Papa Erdoğan. “I’m really excited to see my son dance. I think I’m more excited than him!”

The nine-year-old Zoé is in the fourth grade of a primary school and lives with her parents and her seven-year-old brother in Berlin. She is known from the RTL soap “Gute Zeiten, Bad Zeiten”, in which she plays the role of “Kate Wiedmann”.

Her greatest role model is practically a colleague – Valentina Pahde, who is currently in the 14th season of “Let’s Dance”. Soon Zoé will experience that too. “I’m looking forward to ‘Let’s Dance Kids’ because I’ve always wanted to learn to dance properly, and I’m really excited and excited about our choreographies.”

Of course, the little ones don’t step into the spotlight alone. Professional dance partners teach the kids the steps of waltz, cha cha cha and co. They are supported by popular “Let’s Dance” professional dancers. These coaches keep an eye on everything during training and on the show and help the couples where they can.

The 14th season of “Let’s Dance” is currently running – every Friday at 8:15 pm. In parallel to the TV broadcast, you will also see the broadcast on TVNOW in the live stream and also on TVNOW for subsequent access.

Only for 2 days: Media Markt and Saturn are celebrating a...

First delivery of the corona vaccine has arrived in Austria –...

Kanye West and Kim Kardashian are said to be facing divorce