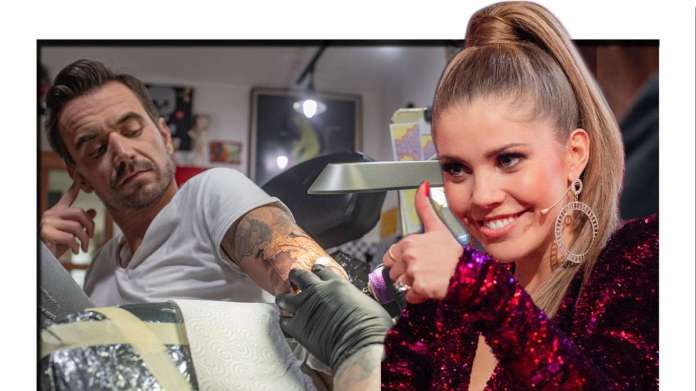 Victoria Swarovski not only wants to demonstrate her acting talent with the ZDF dream ship, but also wants to unpack her “Let’s Dance” knowledge. The 27-year-old presenter hops into the role of a dance teacher on the ZDF dream ship on Easter Sunday.

Cologne – “Let’s Dance” presenter Victoria Swarovski (27) and pop star Florian Silbereisen (39) can soon be seen together on the ZDF dream ship. The 27-year-old dives into the role of Mia Wagner and plays the dance teacher on the dream ship. Now she can put her “Let’s Dance” knowledge to the test (read here: Jan Böhmermann etches against the “dream ship” – star guests for “cheap headlines”)

Dream ship fans should already know that Florian Silbereisen has a Helene Fischer tattoo. But now the singer has a compass tattooed on his arm as an homage to the dream ship. That makes Victoria Swarovski curious. She asks the pop star to present his tattoo. “Undress yourself! Get naked! ”Laughs the 27-year-old“ Let’s Dance ”presenter. But Florian Silbereisen admits to be a little shy.

That sounds almost like flirting! But Victoria Swarovski reveals that she is still happily married to her 17-year-old husband Werner Mürz (44). Florian Silbereisen, on the other hand, has not landed a new fish since his separation from Helene Fischer.

++ Subscribe to our Telegram channel now and be the first to read our best stories. ++

Victoria Swarovski reveals that she would like to have a tattoo herself. The pop star has even selected a motif for Victoria Swarovski – a picture of him as the captain of a dream ship! “You never regret that!” Whether that is an allusion to his Helene Fischer tattoo, which he had on his upper arm as a token of love, one can only guess. The Helene tattoo is still there, reveals Florian Silbereisen. Even after the breakup, the pop singer wants to keep his beloved motif, because “some of them have a Michael Jackson tattoo, and I’m Schlager and I have the Schlager queen on it.”

Victoria Swarovski is planning an acting career after the dream ship. She could imagine starring in action films. Your goal? To be the next Bond girl. How the 27-year-old “Let’s Dance” presenter does as an actress can be seen on Easter Sunday on the ZDF dream ship.

Bodo has the blues

Apps for Android and iOS

Resignation at the head of the Investment Bank

Eleven of the match day: Schalke provides four professionals for the...