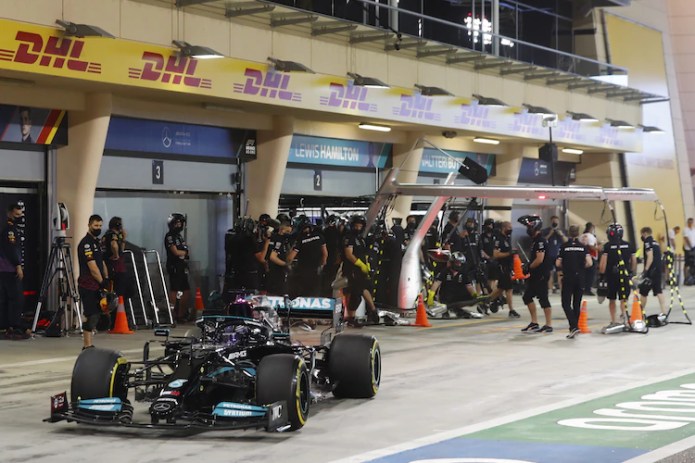 Lewis Hamilton has been philosophizing about his races for years: “Victories that I have to fight hard for are my favorite. And there are times when a third or fourth place against all odds offers more satisfaction than an effortless victory. During the winter test it was already clear to me that Red Bull Racing and Max Verstappen would blow a lot of headwind in my face this year, and this impression has now been confirmed. “

The Englishman is by no means bent: “We and Red Bull Racing are closer together than expected. I thought that Max would have a bigger lead. So we’ve done a good job and we’re catching up. “

“Judging by the car from the winter test, we couldn’t change a lot, but we did more fine-tuning. Because it will take time to make up for the deficit. Maybe it’s because of the race track here, that can’t be said today. I also expect a very strong performance from Red Bull Racing in the race. “

Still: is the solid idea of ​​Mercedes something of a turning point? Lewis evades something: “We want to move forward as soon as possible. But it was always clear that Red Bull Racing would have the faster car first. I’m proud of everyone’s work on improving the car. ”

Circulating in the paddock: The latest rule changes by the international auto sport federation FIA in terms of aerodynamics have damaged world champions Mercedes more than Red Bull Racing. Should the permanent world champions be slowed down here? Lewis immediately: “Of course the changes were also aimed at putting the reins on us. This is not new either, it was tried before with the engine. But that’s okay. We love clearing out. ”

What can the 95-time GP winner say about the vehicle balance in the endurance test? Lewis: “The balance isn’t bad, but it’s not spectacularly good either. Our information shows that Red Bull Racing is a good two tenths ahead of us per lap. But again: That is less than I expected after the winter tests. ”

In which areas does Mercedes have to improve to overtake Red Bull Racing? Lewis smiles: “I’d rather not say that here.”

Warning to Germany: The case of Australia shows China’s unscrupulousness

Schalke ends the series without a win – Dortmund wins in...

US Corona aid package: That’s why the euro rate increases on...

Corona lockdown in Germany: These rules apply to the shutdown on...

Federal and state governments for hard lockdown from the middle of...

Rapper Fler sentenced to ten months in prison – on probation!...