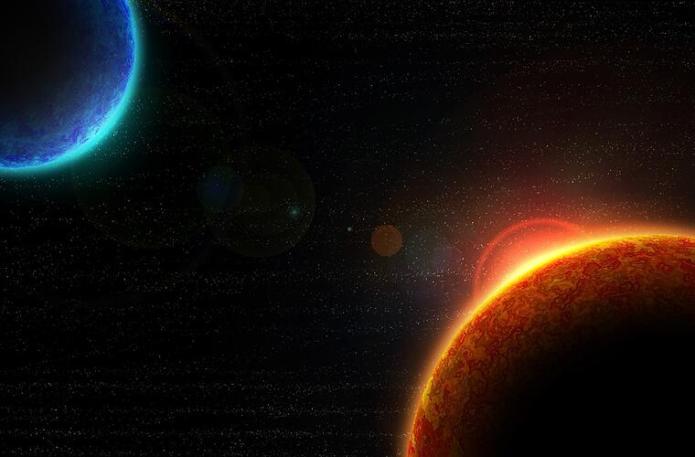 Over the past two and a half decades, astronomers have tracked down numerous exoplanets made of gas, ice and rock. With the advent of efficient exoplanet hunting facilities, the number of newly discovered worlds outside the solar system quickly rose into the thousands. Sometimes the researchers spoke of having found 24 Earth-like planets on which the living conditions were sometimes even better than on our home planet. Another time a student discovered 17 new planets. But only a few planets are really Earth-like. And what we really know about them is often based on indirect observations and interpretations. Picturesque depictions of hilly planetary landscapes under two suns, as they are also shown by NASA, then arise more from the artist’s imagination than hard scientific facts.

A look into a strange atmosphere

Researchers are now re-reporting Trifon Trifonov from the Max Planck Institute for Astronomy about the discovery of a hot super-earth orbiting the red dwarf star Gliese 486, “only” 26 light-years away. The short distance for astronomers should enable better observations in the future and tell us what it really looks like on the planet. Even so, observations at a distance of 26 light years remain difficult. Translated to Earth, it is as if you wanted to observe a pin at the South Pole from the North Pole.

Order telescope for beginners from Amazon

What makes the planet known as Gliese 486b so special is that, despite its short distance from its mother sun, it may be part of its original sun the atmosphere has kept. It is therefore particularly suitable for examining its gas envelope and its interior with the next generation of space- and ground-based telescopes.
By combining various observation techniques, astronomers have determined planetary masses, sizes, and even mass densities that allow them to estimate their internal composition. But these data only allow indirect conclusions to be drawn about the peculiarities of the planets. The next goal of fully characterizing these Earth-like exoplanets by studying their atmospheres is a much greater challenge. Especially in rocky planets like Earth, such an atmosphere only consists of a thin layer, if it exists at all. For this reason, many current atmospheric models of rocky planets remain unchecked.

Gliese 486b: A mixture of Earth and Venus

Planetary atmospheres must meet certain requirements in order to be observed with next-generation observatories. At a distance of only 26 light years, scientists from the CARMENES consortium (Calar Alto high-Resolution search for M dwarfs with Exoearths with Near-infrared and optical Échelle Spectrographs) have now found a planet orbiting the red dwarf star Gliese 486 and meeting these requirements Rock planets perfectly fulfilled. The newly discovered planet named Gliese 486b is a super earth with a Mass, the 2.8 times as big is like that of our home planet. He is also 30 percent bigger than the earth.

“The proximity of this exoplanet is exciting because we can examine it more closely with powerful telescopes such as the upcoming James Webb Space Telescope and the future Extremely Large Telescopes,” explains Trifon Trifonov. He is a planetary researcher at the Max Planck Institute for Astronomy (MPIA) and the lead author of the article in which this discovery is presented.

If one calculates the mean density of the planet from the determined masses and radii, it turns out that it has a similar composition to Venus and the earth, including a metallic core. Anyone who likes Gliese 486b would Attraction feel that 70 percent stronger is than what we experience on our homeworld.

Gliese 486b orbits its mother star on one Circular path within 1.5 days and in one Distance of 2.5 million kilometers. A rotation around its own axis takes just as long so that one side is always facing the star. Although the star Gliese 486 is much fainter and cooler than the sun, the radiation is so intense that the surface of the planet is at least 700 Kelvin (approx. 430 ° C). In that sense, Gliese 486b’s surface is likely more like Venus than Earth, with a hot and arid landscape criss-crossed with glowing lava flows. Life as we know it from Earth is improbable under these conditions.

“The discovery of Gliese 486b was a stroke of luck”

In contrast to Venus, Gliese 486b may only have a thin atmosphere, if at all. Model calculations could agree with both scenarios, since radiation from stars can cause atmospheres to evaporate. At the same time, the planet’s gravity helps to maintain it. It is difficult to determine the balance between these two contributions.

Starry sky 2021: These phenomena can be seen this year

“The discovery of Gliese 486b was a stroke of luck. A hundred degrees hotter and the entire surface of the planet would be lava. Its atmosphere would consist of evaporated rock, ”says José A. Caballero from the Centro de Astrobiología (CSIC-INTA, Spain) and co-author of the study. “If Gliese 486b were a hundred degrees colder, however, it would have been unsuitable for follow-up observations.”

The future measurements that the CARMENES team have in mind take advantage of the orbit orientation that causes Gliese 486b to cross the surface of the central star from our point of view. Whenever this happens, a tiny fraction of starlight shines through the thin envelope of the atmosphere before it reaches Earth. The various compounds absorb the light at certain wavelengths and leave their footprint in the signal. With the help of spectrographs, the astronomers split the light according to wavelengths and look for absorption characteristics in order to derive the composition and dynamics of the atmosphere. This method is also known as transit spectroscopy.

A second spectroscopic measurement, known as emission spectroscopy, is planned when parts of the illuminated hemisphere such as moon phases become visible during the orbit of Gliese 486b until it disappears behind the star. The spectrum contains information about the bright, hot planetary surface.

“We can hardly wait until the new telescopes are available,” says Trifonov. “The results will help us understand how well rocky planets can hold their atmospheres, what they are made of, and how they affect the distribution of energy on the planet.”

48 people died in accidents on Berlin’s streets this year –...

The beginning of a new judo era

Cassandra Steen has to bury her childhood dream after divorce