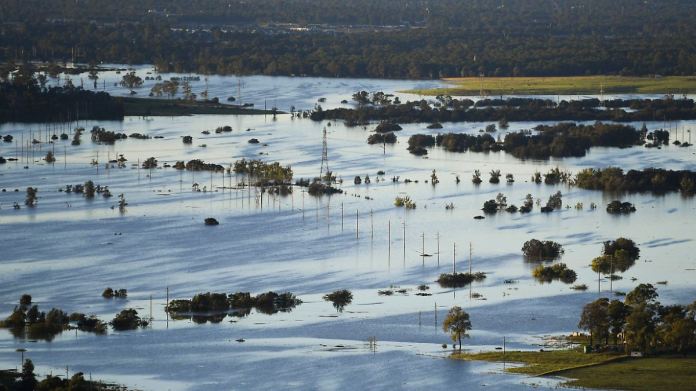 “Like scene from horror movie”
Will the flood stop the mouse plague in Australia?

Devastating fires, droughts, torrential rain that lasted for days: Australia has had to endure a lot lately. Now the masses of mice are loose and are eating their way through whole swathes of land. Can the flood stop the “mouse plague of biblical proportions”?
“Hundreds of mice clearing shelves with groceries and eating everything that comes under their eyes: it sounds like a scene from a horror movie.” This is how the Australian television broadcaster ABC described a few days ago what has been going on for months in the southeast of “Down Under”. In the outback towns of Tottenham, Walgett and Gulargambone, three patients were bitten by rodents in hospitals. An Australian contracted lymphocytic choriomeningitis (LCM), which is transmitted by mice – the symptoms of the rare condition initially resemble flu.

Drought, devastating fires, the corona pandemic and now a mouse invasion – the state of New South Wales with its dazzling metropolis of Sydney has experienced just about every conceivable natural disaster in recent years. Not for nothing did the Australian Guardian speak of a “mouse plague of biblical proportions”. Citizens reported mouse droppings on their pillows and the fact that the whole front yard was moving in the light of flashlights. In many places, mousetraps have long been sold out. And the crops are also threatened by the rodent invasion.

There was only one thing left: to hope for heavy rain, that the mice drown in their den and that the land might be cleansed of the plague. The prayers were answered to a certain extent, but half the region is now under water. Tens of thousands of people had to leave their flooded houses after days of heavy rain and have lost everything. Images of the flood have been going around the world for days.

Thousands upon thousands of spiders on walls

Presumably many animals drowned in the masses of water – photos of cows and kangaroos floating in the water were circulating on the Internet, an exhausted emu was pulled into a boat at the last minute and rescued. Thousands upon thousands of spiders crawled up house walls and fences to save themselves. What about the mice? “I’m in my garage right now and would normally pick up 50 to 80 mice a day here, but at the moment I only find 5 to 10. That is a massive decrease for us,” “ABC” quoted Enid Coupé from the small town of Walgett’s upstate Region.

Farmers and other residents, however, reported that countless rodents had fled from outside into houses and sheds, where it was drier and warmer. Experts doubt that the masses of water can stop the advance of the mice. “It is difficult to predict exactly what the rain will mean for the mouse populations,” “ABC” quoted scientist Steve Henry from the research agency CSIRO.

The buildings of the mice are a highly developed network that could possibly also protect them from heavy rain. It is possible that many young drown – but whether the number of adult mice will be greatly decimated is unclear. In addition: Mice are real “incubators”, writes CSIRO on its website. A female can give birth to up to ten young every 20 days. It is difficult and expensive to control the animals.

The mice are also pleased with the bumper harvest

Background to the plague: After years of drought, rural New South Wales and parts of Queensland have seen record harvests after the last rainy season. The increase in grain and other agricultural products delighted not only the farmers but also the mice. First, their numbers exploded in October in the tropical north, then the gray animals spread further and further south. “ABC” spoke of the worst plague in decades. Meanwhile, the rodents were also approaching the border with the state of Victoria, it was said at the beginning of the week.

Meanwhile, people are fighting their own personal battle against the mice. In the best “Aussie” fashion, it has become a kind of sport for many families to catch as many rodents as possible and to constantly develop new ideas to dispose of the animals. Because they are everywhere – under the fabrics of seating furniture, in ventilation shafts, in the fans of the refrigerators, in water tanks.

Pip Goldsmith from Coonamble placed mousetraps in her car early in the evening and found 20 dead animals by midnight, the Guardian reported. “Dead or alive, they stink,” she told the paper. “You just can’t escape the stench.” CSIRO estimates that the end of the plague will only be in sight in July, when the cold season arrives and the fields are empty.

Older people have an increased risk of re-infection with corona

Recall for several spices because of disinfectants – Heilpraxis

Resilience study: Decision-makers estimate productivity in the home office to be...

GDP forecast for 2021 lower due to second wave

“The Rosenheim Cops”: Inspector Anton Stadler is back

Sweet news for Til Schweiger: The baby is here!

Eintracht Frankurt against Bayern: These reasons speak for a surprise |...