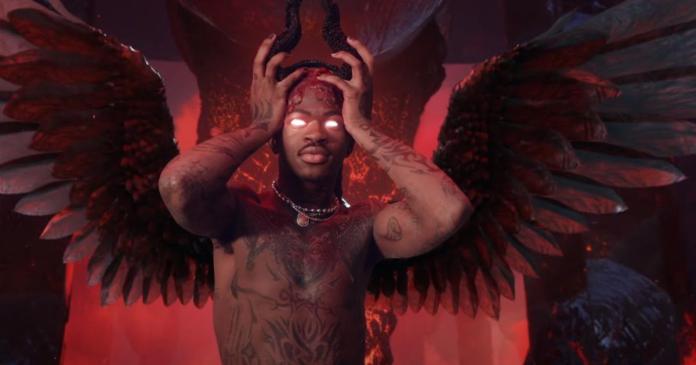 The music video for “MONTERO (Call Me By Your Name)” caused a sensation worldwide – among other things for its shameless queerness.

Lil Nas X’s coming out in 2019 was a bold move. Homophobia is still widespread in the male-dominated rap genre – as an aspiring rapper who just landed a world hit with “Old Town Road” and enjoyed a predominantly male, heterosexual fan base, he ran the risk of ruining his career before it even really started.

But what Lil Nas X is doing now is much braver than his coming out: He could just as easily continue to deliver songs and videos that are suitable for the masses à la “Old Town Road”, he could not further address his queerness and make all those people happy who like to claim that they have nothing against gays as long as they don’t reveal their sexuality to the outside world. He could please these people – and does the opposite of it.
His long-awaited new single “MONTERO (Call Me By Your Name)” has his real name in the title – and is about as explicit as a song about a sexual affair can be. This is nothing new in and of itself – but from the perspective of a gay man it is.
Nowadays there are actually more openly queer pop stars than ever – but nobody really does it to convey one’s own sexuality as shamelessly and energetically as Cardi B or Meghan Thee Stallion manage. On the contrary: Sam Smith, for example, usually completely dispenses with pronouns in song lyrics – in this way it is not clear what is being sung about. (It was only after the album “In The Lonely Hour” became a worldwide hit that Smith revealed that the songs on it were about a man.)

No false shame in the music video

Lil Nas X, however, leaves nothing open in “MONTERO (Call Me By Your Name)”. “I want to shoot a child in your mouth while I’m riding” is one of the lines of text – and in the accompanying music video the rapper also gives a lot of gas: He deliberately plays with biblical references and initially presents himself as Adam in the Garden of Eden who seduces, condemns and being stoned. When he ascends to heaven, he slides along a strip pole straight into hell, where he personally ensnares Satan with a lap dance and finally breaks his neck.

To mark the release of the song and the accompanying video, Lil Nas X shared an emotional letter on his Instagram channel that he addressed to his 14-year-old self.

He knows that he will be accused of pushing an agenda – and that is also the truth: “The agenda that people should stay out of the lives of others and not tell them who they have to be.”

As expected, the reactions turned out to be different: Conservative Christians are already completely beside themselves because of the scene in the music video in which Lil Nas X is having fun with the devil – a pair of sneakers that the rapper sold under the name “Satan Shoes” brings out, does the rest. (The sole of the shoes is said to be filled with a drop of human blood.)

Queer fans, on the other hand, celebrate that a pop star like Lil Nas X not only admits his homosexuality, but also unrestrainedly thematizes and depicts it. Writer Bradley Stern writes on Twitter, “I can’t stop thinking about what it would be like to grow up with a superstar who delivers that kind of unabashedly gay hunger games demon stripper fantasy.” That the younger generation is now experiencing exactly that is “so damn cool”.

Town hall and Marx-Engels forum is to be renewed