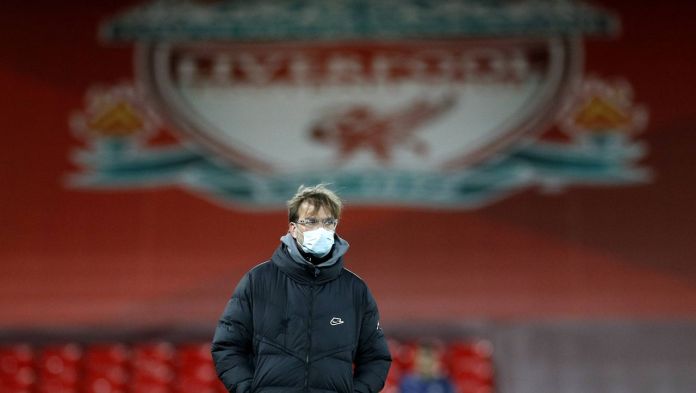 Liverpool FC versus Chelsea FC, this game had been announced to the specialist audience on the island as the great duel of the German concept coaches: Jürgen Klopp’s vertical assault football against the slower game by Thomas Tuchel, influenced by Pep Guardiola’s primacy of ball control.
At the end of the dispute, the guests from London won more clearly than the 0: 1 put it, but could not really prove the programmatic superiority of their approach. The competition of ideas at Anfield Stadium was simply far too unequal for that: Liverpool, unlike the lively blues, was never able to bring its plan to the field.

As so often in the past few weeks, the injured champion appeared powerless in the fifth home defeat in a row, especially in attack. During the week, statisticians for the “Times” had calculated that Liverpool were still one of the top four teams in the Premier League in terms of their own and opposing chances of scoring; In other words, the results were ultimately worse than the achievements and were quite unlucky.

Against a well-organized Chelsea, however, the Reds did not come to a single really dangerous conclusion within 90 minutes, the offensive efforts were completely lacking in force and inspiration. “We did a lot right up to the last third, but not in the crucial moments,” said Klopp, describing the dilemma with a lot of benevolence. He can hardly say that his team is not only lacking in the details, but, much more fundamentally, in what made them so extraordinary in previous years: their explosive moment.

Poison for the legs and head

“Intensity is our identity,” said assistant coach Pep Lijnders a few months ago. Conversely, Liverpool currently looks lost, almost faceless. Numerous failures and the resulting freshness of the core workforce have robbed the team of its vehemence in the gloomy association with the dense calendar and corona-related ghost games. The replacement of star striker Mohamed Salah in the 62nd minute was symbolic of this.

“He looked like the intensity had gotten him down, we wanted to protect him,” said Klopp.

The Egyptian looked completely out of shape. Those five to ten percent, which he is currently missing just like all the other important players, are enough to present Liverpool with bigger problems in almost every game against well-tiered opponents.

But even Liverpool’s pressing worked almost not at all in the absence of consistency. Tuchel’s team worsened the misery by pulling the hosts apart with long balls over the high defense – this was how Mason Mount’s goal fell (42nd minute) – and later chasing the Reds across the lawn with long short-pass combinations after winning the ball. The many meters without play equipment were visibly poison for the legs and head of the home side.

Everything in flux with Tuchel

“It was a complex performance in which a lot was right: our counter-pressing, our defensive will, the courage to playfully free ourselves from the pressure,” said a delighted Tuchel. Chelsea have been unbeaten ten games since their arrival (eight wins), hard to crack at the back with a three-man chain and variable at the front like no other team in the league due to the high squad density. Since the high technical skills of the troops have been accompanied by specific tactical instructions from the bank, their game has literally blossomed. Everything is in flux, in rhythm. The Londoners pranced their way to fourth place with the victory and will land in the Champions League places in this condition.

It is precisely this minimum goal that is in great danger on the other side. “Whoever loses so many games does not have the right to play in the Champions League,” said Klopp. His club is now in seventh place, the crisis is vaguely reminiscent of the problems from Klopp last season’s first half of the season in Dortmund, when they suddenly slipped to 17th place.

At that time, too, as analysts later discovered, the results were disproportionately bad, but so many little things were still wrong that the big picture was no longer right. “We didn’t have the usual system security, made systematic mistakes in defensive behavior, were incredibly vulnerable to counterattacks,” said Klopp’s assistant Peter Krawietz in retrospect. “We could not implement the impulse of counter-pressing sustainably, but there was no time to practice it.”

Six years ago, the winter break, the warm sun in Marbella and many units on the training ground brought about the timely change at BVB. Unfortunately, just such a change in air is currently not possible. Liverpool has to work its way out of the wasteland alone in the cold, eerily quiet city.

According to Reuters – For Brexit, all signs point to an...

Faster on the bike path to Frankfurt

Fight for CDU chairmanship: Laschet and Merz in the runoff election...