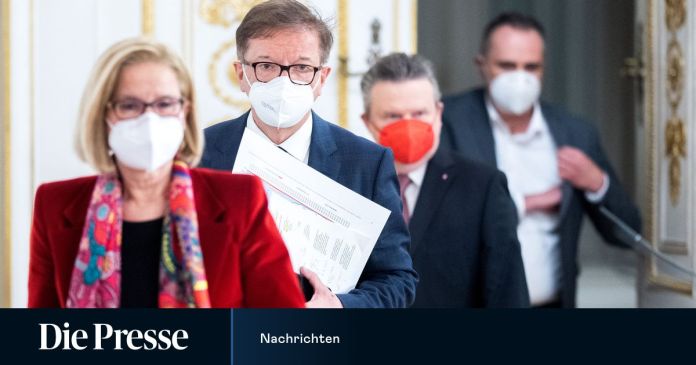 Exit restrictions, extended FFP2 mask requirements, commuter controls and much more: The corona measures for Vienna, Lower Austria and Burgenland will be tightened from April 1st to 6th. Further readjustments are not excluded.

An “Easter rest” including exit restrictions, business and trade closings, PCR tests, FFP2 mask obligations, distance learning and much more: The governors of Vienna, Lower Austria and Burgenland, Michael Ludwig (SPÖ), Johanna Mikl-Leitner (ÖVP ) and Hans Peter Doskozil (SPÖ), as well as Health Minister Rudolf Anschober (Greens) hope that after a negotiation marathon with stricter measures – a “cool down”, as they call it – the number of infections with the coronavirus and especially with its British mutant to be able to contain.

“We are in a very difficult situation in Europe”, with these words, Anschober opened the press conference at 7:30 pm. We are currently “in the third wave, 19 EU member states have rapidly increasing numbers, including Austria”. It is therefore all the more important, on the one hand, to keep the numbers down in general in order to prevent overloading of the intensive care units in the hospitals on the other. The latter is currently particularly to be feared in eastern Austria. The main reason: The more contagious, “dynamic” British variant of the virus.

The forecast calculators assumed that this will not change anytime soon – on the contrary: In the next two weeks, the numbers, especially in Vienna, are likely to continue to rise and thus the load limit of the stations will be reached or exceeded. These prospects and the wish “that these tough triages will not come about” have been intensively negotiated in the past few hours, “but not argued”, as Anschober emphasized. “I am glad that we have taken the opening steps back,” he emphasized, even if he would have liked to take a seat in a guest garden himself. The time is not yet ripe for this, but for three other steps: reducing social contacts, massively expanding testing and increasing the use of FFP2 masks.

Specifically, that means it from April 1st to 6th in Eastern Austria to a lockdown will come:

From April 1st to 11th the following also applies:

Further tightening cannot be ruled out

“If we don’t see results in a timely manner, we will have to go beyond this package,” added Vienna’s Mayor Ludwig. Six weeks ago the federal capital had good figures, now the tide has turned – a situation that has already been observed in other federal states. One is confident of being able to turn it around again, said the governor. However: “There is an urgency” to act. The next “eight to ten weeks we still have to get through until a larger part of the population is vaccinated” and one can lead a normal life again.

“Up to now we believed that the school would be less affected, we now see it differently,” added Ludwig. It was therefore agreed that not all students should come back to the classes at the same time, or only those who can show a negative test. Because: “The risk of infection there is very high.”

Everyone should help “to turn the tide”

Lower Austria’s governor, Mikl-Leitner, called the measures “necessary, correct and important”. Experts had warned urgently of the critical situation in the hospitals: “The virus does not stop at borders,” she emphasized. It was therefore decided to shorten the validity period of the tests for commuters to 72 hours. She would have liked to announce that the trade would remain open, “that’s what I’ve always advocated,” admitted Mikl-Leitner. However, the expert opinions differed on this point. The conclusion: “We made a conscious decision against a two-week lockdown, we consciously opted for a four-day rest period from April 1st to April 6th (meaning working days, note).”

No one in politics wants to be held responsible for the fact that someone does not get an intensive care bed when they need one, added the Burgenland regional chief Doskozil. For this reason, cohesion across party lines is needed. And: It needs every single citizen. “If we cannot convincingly convey the sense of the measures to the population, they will not work,” warned the former defense minister. He can understand that people have become tired, but it takes everyone’s contribution “to turn the trend around”.

Netflix hit “Lupine”: when is the second part?

Archdiocese of Cologne: Terrifying report on victims of abuse – thousands...

EU-China investment pact is in place