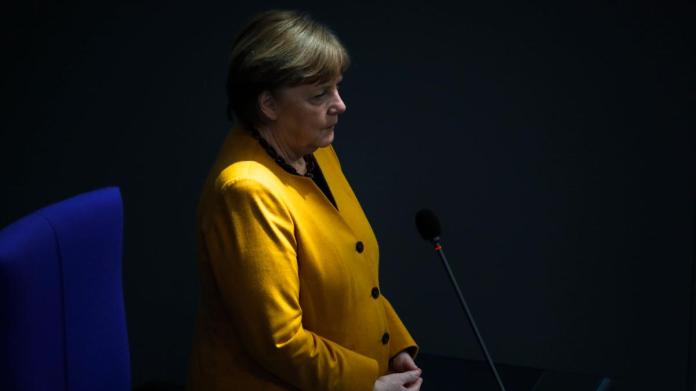 Merkel rejects a vote of confidence – “I won’t do that”

Angela Merkel is sure of the backing of the Federal Government and the Bundestag – even without a vote of confidence. The Chancellor made this clear in an interview on ARD. She justified her U-turn at Easter – and spoke again of curfews.

Bund-Chancellor Angela Merkel has rejected the opposition’s demand to put the vote of confidence in the Bundestag. “No need. I will not do that, “said the CDU politician on Wednesday evening in an ARD hotspot.

In the morning Merkel had withdrawn the resolutions from Tuesday night and asked for forgiveness for her “mistake” in a statement in the Federal Chancellery. “I think that’s the right thing to do,” said Merkel on ARD. “Otherwise, I have the support of the entire federal government and, to that extent, also the parliament.” This logical conclusion – Merkel is elected by the Bundestag, not by her ministers – she did not, however, put into concrete terms.

The FDP, AfD and the Left had suggested to Merkel that after withdrawing the plans for a tightened lockdown over Easter, to ask the vote of confidence and thus to check whether she still has a majority for her course in the Bundestag. Merkel has now rejected that.

As the only opposition party, the Greens had not demanded the Chancellor’s last resort. Party leader Annalena Baerbock justified this with the possible consequences of this question. “If you thought it through to the end, that would mean changing the federal government,” said Baerbock, also on the ARD broadcast. Baerbock did not want to assess whether Merkel still had the support of the Union and the SPD.

The interview in the ARD focal point was after the statement at noon and the government survey in the Bundestag, the third appearance of the Chancellor on Wednesday. In the conversation, Merkel again admitted that she hadn’t checked her lockdown plans enough in advance. “Unfortunately, we didn’t plan as much as one might have had to plan,” said Merkel in response to a question.

Merkel repeated her request to stay at home over Easter and not travel. Due to the virus mutations, the situation is different than at Christmas or New Year. If the wild type of the coronavirus continued to be the predominant one, the previous lockdown would have had a clearer success and the number of new infections every day would have been lower, said the Chancellor.

Merkel described the decision of Tuesday night as sufficient even without the “Easter rest”. She referred to the possibility of issuing curfews, as in municipalities in Bavaria, Baden-Württemberg, or contact restrictions as was the case in Flensburg in Schleswig-Holstein.

Merkel is still on the Prime Minister’s Conference

Merkel wants to hold on to the prime ministerial conferences despite criticism. The Infection Protection Act was designed in such a way that the ordinances would have to be issued by the respective countries. “So that Germany is not a complete patchwork quilt, it makes sense to agree on certain things in common,” she said. The prerequisite, however, is that everyone has the same understanding of the pandemic.

The Chancellor only allowed criticism of the duration of the conference. “Certainly 15 hours of discussion are not the last word either. But I think everyone understood that and we’ll think about it, ”she said.

Corona measures in the USA

On the question of vaccinations, Merkel reiterated her view that the European Union had ordered enough vaccine, but production and delivery stalled. “We used to have to concentrate on production capacities in Europe because neither the United Kingdom nor the USA exported anything,” said Merkel. She is happy about the Biontech plant in Marburg, from which significantly more vaccine doses will be delivered from April. “Basically there shouldn’t be an appointment in the country that has not been taken when you have the vaccine dose.” So far, it has not yet been possible to involve general practitioners and company doctors. But their time will come.

Myanmar: Reports of violence by soldiers during protests against the military

Bares for rarities: Susanne Steiger intervenes at IHR – “Can’t be!”

Parliamentary election in Kosovo: “If he screws it up, it’s over”