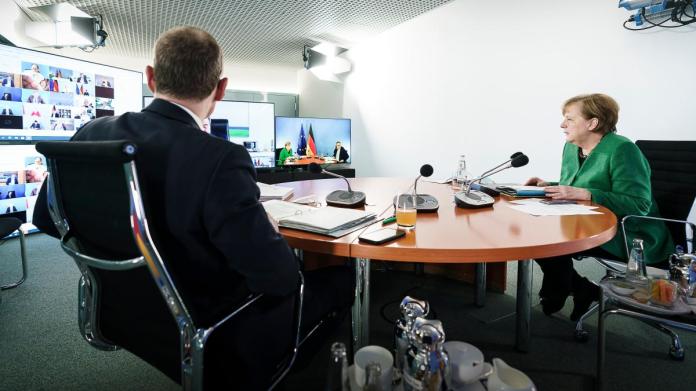 AIn view of the continuing increase in the number of corona infections, the federal and state governments are sending Germany Easter in the sharpest lockdown since the beginning of the pandemic a year ago. From April 1st to 5th inclusive, i.e. from Maundy Thursday to Easter Monday, public, economic and private life is to be largely shut down in order to break the third wave of the pandemic.

Chancellor Angela Merkel (CDU) and the prime ministers of the federal states decided on Tuesday night. The deliberations dragged on for hours – after massive disputes, the large-scale debate was interrupted between 6.30 p.m. and 1 a.m. The one that has lasted for months Lockdown will be extended until April 18th.

Of the Maundy Thursday and Holy Saturday are therefore unique as Rest days defined and associated with extensive contact restrictions. “The principle WeBleibenZuHause applies for five consecutive days,” says the paper. According to this, the food trade in the narrower sense should only remain open on Holy Saturday. Private gatherings should be limited to your own household and one other household, but no more than five people. Children up to 14 years are not counted. Couples are considered one household.

Outdoor catering has to close where it is open

According to the decision, gatherings in public spaces are generally prohibited during this period. Where outside catering is already open, it has to be closed again for these five days. Only vaccination and test centers should remain open.

+++ Read the resolutions of the Corona summit in full here +++

Chancellor Merkel sees Germany in a “very, very serious situation” in view of the spread of the virus variants and the increasing number of infections. The key terms are “caution and flexibility,” said Merkel after the consultations with the Prime Minister were concluded.

For Vacationers abroad should a general change in the Infection Protection Act Test obligation before the return flight to be introduced. It should be made a prerequisite for entering Germany.

About the Easter holidays it should if possible no face-to-face services give. The federal and state governments want to approach the religious communities with a corresponding request.

In Counties with a seven-day incidence in excess of 100 the applicable corona restrictions should be repeated tightened become. These can include exit restrictions, stricter contact restrictions and the obligation to wear medical masks for passengers, even in private cars.

The federal government is also planning additional corona aid for companies. “For those companies that are particularly severely affected by closings in the context of the corona pandemic and have been affected for a very long time, the federal government will develop a supplementary aid instrument within the framework of European legal requirements,” says the decision paper.

What exactly these additional aids should look like initially remained open. Additional programs for sectors that are particularly affected, such as tourism or gastronomy, are conceivable.

During the crisis, the federal government has already decided on aid programs worth billions. Business associations, however, repeatedly criticize that aid arrives too late and that the funding system is too complex. Most recently, the federal and state governments agreed on a hardship fund for companies that have so far fallen through the cracks.

For Schoolchildren, teachers and daycare workers want federal and state Expand corona tests and strive for “two tests per week as soon as possible”. Self-tests have recently been issued at schools and daycare centers. The distribution and organization varies from region to region, and the practical implementation is still being discussed in many places, for example the question of whether the tests should take place at home or at school.

Above all, it is about the easier-to-use tests, without deep nasal or throat swabs. In addition, conventional rapid tests that are carried out by trained personnel are still offered. Mathematically, with two tests per week for all daycare and school staff as well as all students in Germany, more than 20 million tests would be required per week.

Merkel and the Prime Minister did not make any specific agreements on the organization of the further operation of schools and daycare centers, for example on possible closings or other restrictions. The federal states continue to regulate these questions on their own.

Most difficult round of negotiations since the outbreak of the pandemic

The resolutions were preceded by the most difficult round of negotiations between the Chancellor and the state leaders since the outbreak of the pandemic. Negotiations lasted more than eleven hours – due to a dispute over so-called “low-contact vacation” in their own state, however, the big round was interrupted for hours.

Schleswig-Holstein, Lower Saxony, Mecklenburg-Western Pomerania, Saxony-Anhalt and Rhineland-Palatinate insisted that their citizens should be able to vacation in holiday flats, holiday homes, apartments, caravans and mobile homes, provided they have their own sanitary facilities and organize their own meals can be. Nothing more can be found in the resolution.

According to reports, Chancellor Merkel was dissatisfied with the interruption of the deliberations. You have argued that the measures taken up to that point were not enough to break the infection dynamics. You could not survive in public like this.

Corona, Vaccination Commission: This is how vaccination should take place in...

Registration is required from Friday before entering Austria

WhatsApp postpones the introduction of the new data protection rules after...

WhatsApp updates terms of use: What you should know about the...

Augsburg: Coronavirus: Numerous seniors in the homes have died