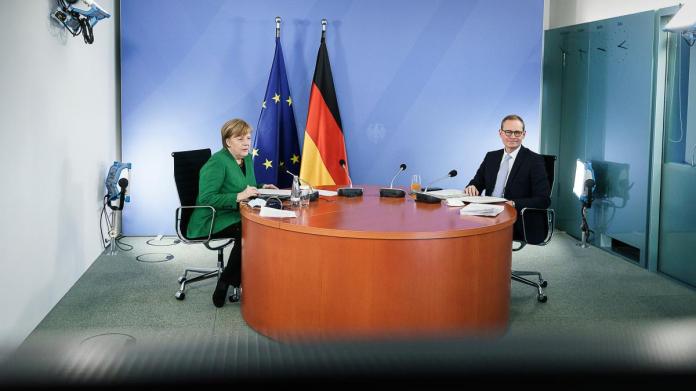 Lockdown will be extended until April 18th – No exceptions for Easter

The lockdown in Germany will be extended by four weeks. The federal and state governments agreed on this in their deliberations. There should be no exceptions for visiting relatives at Easter. And many points are still in dispute.

Band countries have agreed to extend the lockdown until April 18th. WELT learned this from participants. An extension was not disputed, it is said.

As the German press agency, “Spiegel” and “Bild” report unanimously, exceptions to the contact restrictions for Easter are already off the table. Visits from relatives, as they were allowed at Christmas, would then not be allowed.

In a draft resolution of the Chancellery, which WELT has received, it was suggested that close family meetings with four people beyond their own household plus children under the age of 14 should be allowed over Easter.

At the beginning of March, the federal and state governments last relaxed the contact rules. Since then, private gatherings of one’s own household with another person have been possible, but limited to a maximum of five people. Children up to 14 years are not counted. Couples are considered one household.

If municipalities or states were to pull the so-called “emergency brake” due to increasing numbers of infections, this relaxation would be reversed. Then again only meetings of one’s own household with another person would be allowed. A final decision on the measures in detail is still pending.

More than an hour late, the video conference between the Prime Minister and the Chancellor began after 3 p.m. Above all, a possible curfew and exceptions for trips to relatives at Easter are controversial.
The “emergency brake” is also being fought over. According to information from participants, Bavaria’s Prime Minister Markus Söder insists that the “emergency brake” with a seven-day incidence of 100 should not apply to the entire state, but only to the district level.

He had contradicted Hamburg’s mayor Peter Tschentscher, who had proposed tightening the measures at a value above 100 in the entire affected state. Söder wants to keep counties open that have an incidence below 100 or even below 50. That is why a “regional implementation” is important.

Shortly after 6.30 p.m. the summit was interrupted. Merkel advises according to WELT information with individual participants where compromise lines could lie. As in previous federal-state summits, the Chancellor speaks out in favor of stricter corona rules and caution.

In a draft of the Federal Chancellery for the deliberations, which WELT is available, it is warned that the number of new infections will rise so quickly without clearly restrictive measures that “an overload of the health system is likely as early as April”.

The general lockdown with the closure of numerous facilities was initially agreed until March 28th.

What if there is no deal ?: EU presents emergency Brexit...

SNB President Thomas Jordan defends himself against the US allegations

Pop star Michelle: she feels like a new person after breast...

Corona – In short: test refusal due to quarantine “seriously negligent”

Meron Mendel: Hessen must be a pioneer in the fight against...

FFP2 masks are exempt from VAT