As the “Financial Times” describes the situation, it sounds like the game “Escape Room”: Whoever leaves the room – or the investment – first wins.
Holger Alich, Jorgos Brouzos

After this Debacle over the financial boutique Archegos Capital of the finance manager Bill Hwang criticism of the Credit Suisse leadership is voiced internally. “Risk management has totally failed,” says a senior bank manager. “In addition, the US banks liquidated their positions more quickly and were able to minimize their losses.”

A number of banks lent Bill Hwang money – a lot of money for an extremely small company operating in a niche, in the no particularly strict supervisory rules apply. Hwang used the loans to speculate on securities. In doing so, he built huge positions at companies such as the US media group ViacomCBS and Discovery.

Dhe Viacom share slipped because the media group got fresh money to invest in streaming content. As a result of this price decline callsen the banks more Collateral for their loans. Hwang couldn’t deliver that.

Round table with no result

Am past On Thursday, Bill Hwang invited the banks to a round table, like several otherse Media reports unanimously. With it were Representatives of Credit Suisse, UBS, Goldman Sachs, Morgan Stanley and Nomura. The issue was that the banks notify it, to wait with big sales. D.ank such a thing Stall pacts would haven them Had time the blocks of shares that served as collateral, to be handled in an orderly manner. It is unclear whether the banks agreed on a common solution at the meeting. In any case, if there was an agreement, they did not stick to it.

“Goldman will have looked at the situation and made the decision that the first cut is the cheapest.”

A banker opposite the “Financial Times”

In the end it worked apparently Goldman Sachs and Morgan Stanleyto dissolve their positions. You have Archegos-affected securities im $ 19 billion abumped and thus triggered a fall in the price of shares in companies such as ViacomCBS. «Goldman will have looked at the situation and made the decision that the first cut is the cheapest. If you go out first in situations like this, you may not be the best, but you definitely do better than the people who go second or third», a banker involved told the «Financial Times». The losses for Goldman are negligible.

The CS has also started with it, sell their positions, but not to the same extent as US banks. Therefore, like the Japanese bank Nomura, it is now facing particularly painful losses. According to the FT, regulators from the USA, Great Britain and Japan are scrutinizing the emergency sale of the securities.

Equity buffer at a glance

It is still unclear how big the loss of CS from the debacle is. Compared to the US banks, however, the Swiss bank is much smaller and also has less capital. The losses are now threatening to have a correspondingly greater impact. As a result, her share lost 14 percent on Monday and another 3 percent on Tuesday. “The question arises as to whether the position was not much too big in relation to the balance sheet,” criticized a CS banker.

“The problem is that Credit Suisse keeps falling compared to other big banks like UBS and the US institutions.”

At the end of last year, CS had an equity ratio of 12.9 percent. The value should now fall because of the losses. Even the old value was not great compared to the competition. “The problem is that Credit Suisse is falling further and further compared to other big banks such as UBS and the US institutions. At the end of 2020, the five top US banks had an average equity ratio of 13.9 percent and UBS an average of 13.8 percent, ”says Andreas Venditti, banking specialist at Vontobel.

Finma is dealing with the incident. It would be no surprise if regulators now order that Credit Suisse cancel its current share buyback program of $ 1 to 1.5 billion in order to protect its capital base. The bank may already decide this itself. CS does not provide any information on the future of the share buyback program.

One thing is certain: Credit Suisse is knee-deep in the crisis. “Now bank manager Thomas Gottstein is required,” said a high-ranking bank manager. Gottstein would have to fill key positions such as risk control. The focus is on top risk manager Lara Warner. But investment bank boss Brian Chin does not cut a good figure in the Archegos scandal either.

At the end of the month, the big bank gets a new president with the ex-Lloyds boss António Horta-Osório, known as AHO. “If Gottstein does not take decisive action now, the new chairman will probably not watch the whole thing for long,” says a bank insider.

Bank expert Venditti is also calling for consequences: “CS not only has to review risk management, but also strategy, capital allocation and incentive structures in investment banking. It cannot be that a single case causes a loss in the billions. “

Relief prevails: What will change in terms of money in 2021

BSI warns of corona effects on the IT security situation 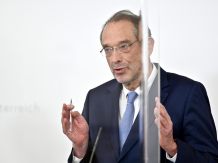 Consultant reveals: Bayern professional is about to say goodbye!