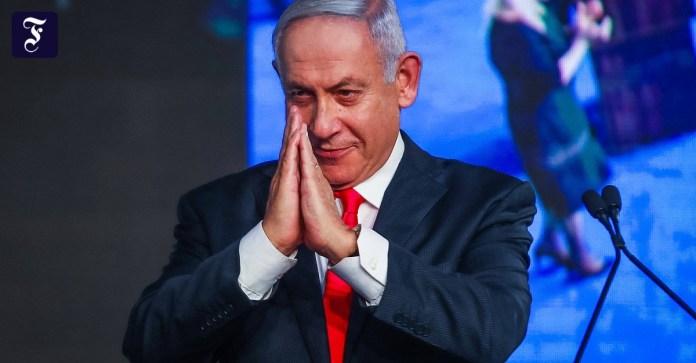 AEven after the fourth election in Israel within two years, there was no clear majority. The party bloc for incumbent Prime Minister Benjamin Netanyahu and that of the parties against him are almost on a par. Even on the morning after the vote, after a preliminary count of around eighty percent of the votes, it is far too tight to be able to assume that a clear government will be formed. Time and again the tendency indicated that Netanyahu could manage to unite a narrow majority of 61 or even slightly more of the total of 120 seats in the Knesset in his camp. This majority also depended on whether the Islamist Raam party fails to meet the 3.25 percent hurdle. However, according to recent information on the state of the counts, Raam could make it into the Knesset, making a majority of Netanyahu less likely.

As expected, Netanyahu’s Likud became the strongest force with around 30 votes. Despite the successful Israeli vaccination campaign, this is fewer seats than in the three elections last year and last year. But Netanyahu can again count on the support of the two ultra-Orthodox parties, which together had more than 15 seats. Another new addition to the Knesset is the fundamentalist-extremist list of “Religious Zionism”, whose racist party association with six seats has clearly overcome the threshold clause and has promised a coalition with Netanyahu.

In this constellation, the right-wing Jamina party tipped the scales, whose chairman Naftali Bennett has not yet made a clear statement, but Netanyahu needs his seven seats to get at least 61 seats in parliament. If this constellation desired by Netanyahu comes true, then Netanyahu will form the most right-wing and also the most religious government in the history of Israel. Many then expect that this coalition majority will pass laws that grant the prime minister, who has been accused of corruption, impunity. Whether Bennett will support this, however, is not certain, which for that reason alone promises difficult coalition negotiations.

The electoral commission does not expect all votes to be counted until Friday. The votes cast in double envelopes by soldiers, quarantined Israelis or other people who did not vote at the polling station are still missing.

On the side of the anti-Netanyahu camp, the formation of a government seems even more difficult. The Yesch Atid party is clearly the second strongest force with around 18 seats. Together with the left-wing Meretz Party and the Labor Party, as well as Defense Minister Benny Gantz’s Blue and White, who also made it into the Knesset with around six or seven seats each, there is not enough for a middle-left government majority in the other camp. This also applies if one wanted to include the Arab United List and the right-wing parties “New Hope” and “Our Home Israel”, which had previously refused to cooperate with both Arab parties and Netanyahu.

A clear majority of Israelis voted for right-of-center parties, but not all of them support Netanyahu. On election night, for example, several political commentators spoke of a fifth election in Israel, the probability of which even the Deputy Health Minister Joav Kisch from Likud considered the highest.

It can therefore already be said that the political crisis in Israel will continue. On the one hand, if the coalition negotiations fail and a fifth election is called in late summer, leaving Israel for two and a half years without an approved budget. Until then, Netanyahu would remain in office on an interim basis. On the other hand, if extremist parties should really make it into the coalition, which would also complicate the government for Netanyahu, whose main focus is on avoiding a criminal conviction in the corruption proceedings against him. Netanyahu refuses to resign.

“The times call for a stable government,” said Netanyahu on election night, recalling that the Likud had clearly become the strongest party and therefore expects the president to give it a mandate to form a government. Netanyahu urged MPs to follow his principle: “I am not disqualifying anyone”. He combined his request with a threat: “We must under no circumstances drag the State of Israel into new elections, to the fifth election.”

Health – Berlin – Health Senator on Corona: “Winter will be...

Majority in favor of banning Christmas services – Germany and worldwide