They are both successful in their jobs.

But now they are slowing down. Both Jana Ina Zarrella (44) and Sarah Richmond (23) cancel shows for their family.

However, this has nothing to do with old role models, even if the men are even more successful with both. They just want to be there for the children now.

That is why Jana Ina Zarrella is hosting the RTL2 show “Love Island” after four years (the finale is on Monday evening).

“Separating from my loved ones over several weeks of production is not easy for me as a mother of two and a family man,” she says to BILD am SONNTAG. “With two seasons a year, the separation from the family is twice as great.”

Your two children are happy. “When I asked them if they would be happier if I wasn’t away for a few weeks for work, they cheered. That was the decisive moment for me. “

Sarah Richmond and professional soccer player Julian Weigl (Benfica Lisbon) are expecting their first child in the next few weeks.

It is also clear to the “Toggo” presenter that she is taking a break for her baby. “It feels just right for us. It is not just any jobs that are important, but that the baby is healthy. “

It was going really well for Richmond. Shortly before the pregnancy, several major broadcasters became aware of her. But she’s not worried.

“I’ll wait for the breastfeeding phase and enjoy the time with the family. Then I can start again. I don’t think becoming a mother at an early age is a career disadvantage. “

Formula 1: Nikita Mazepin – does Haas already have a successor?

Corona worldwide: Queen – “You are not alone” – Health

Apache 207: Apple Music annual charts: It leaves everyone behind

Soccer tournament in Germany: ARD and ZDF broadcast matches of the... 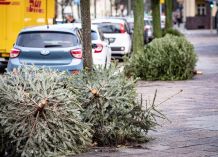