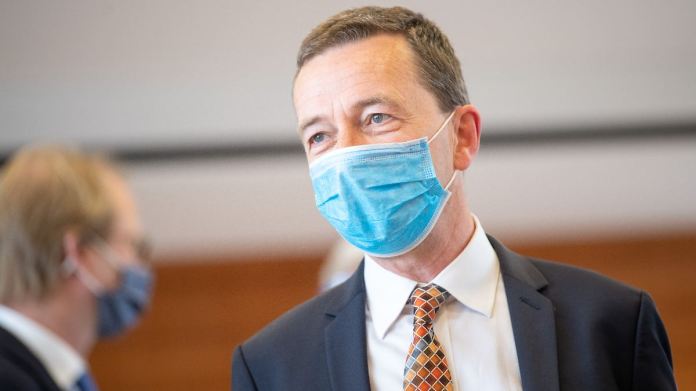 A citizens’ alliance is blocking the EU’s multi-billion dollar corona package with a constitutional complaint. The group around AfD founder Lucke sees the aid as a massive liability risk for German taxpayers. The Federal Constitutional Court stops the ratification in the last few meters.
The Federal Constitutional Court has ordered that the Federal President may not initially issue the German Approval Act for the EU’s financing system until 2027. This was announced by the court in Karlsruhe. The reason is a constitutional complaint connected with an urgent motion against the contained 750 billion euros Corona reconstruction fund, which an alliance around the former AfD boss Bernd Lucke had submitted shortly before. The temporary stop applies until the decision on the urgent application is made. (2 BvR 547/21)

The Federal Council only passed the law in the morning after the Bundestag approved it on Thursday. The 750 billion euros are to serve the economic development in the EU after the pandemic. Part of the money is available as grants and part as a loan. For this, debts are taken on together. The plaintiffs are of the opinion that joint indebtedness is not permissible. Germany is thus taking incalculable financial risks. 2281 citizens are behind the constitutional complaint, as the “Bündnis Bürgerwille” announced on its website.

The alliance invokes the European Treaties, which regulate “that the EU budget must be financed” entirely from its own resources. The debts now envisaged undoubtedly do not belong to “own resources”, but are debt capital. ” The critics argue that legal tricks are being used to attempt to take on a huge debt for the first time in the history of the EU. The “breach of contract” is covered with positive-sounding terms such as “Next Generation EU” or “Corona reconstruction program”.

Germany has so far not allowed the EU budget to become indebted, it says in the statement of claim. That “would be even worse than Eurobonds, because Germany would not only be liable for EU debts if another state were insolvent, but also if it simply left the EU,” writes the Lucke Alliance.

The EU Commission can only start taking out loans and making payments once all 27 EU countries have ratified the decision. A total of around 1.8 trillion euros should be available to the European Union by the end of 2027. Federal Finance Minister Olaf Scholz had previously said that he was confident that the ratification could be completed in a timely manner, despite the announced constitutional complaints. “It is clear that the financing regulated in the own funds resolution is based on a stable constitutional and European law foundation,” said the SPD politician.

Lucke resigned from the party in 2015 in protest against the AfD’s shift to the right and founded his own party together with several representatives of the economically liberal wing. The Liberal Conservative Reformers (LKR) want to run for the federal election in 2021.

Rummenigge congratulates Messi on his mega contract: “I laughed when I...

BioNTech: fight against corona – “there is no other option”

Agent chats on fake call: Navalny is on the phone with...