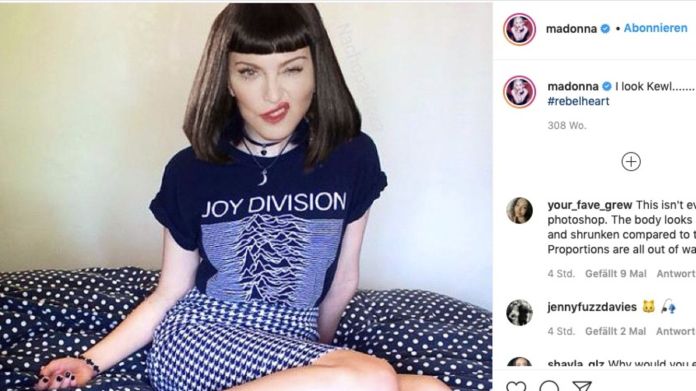 Photo editing fail
Blown up! Madonna posted a picture of her face – on someone else’s body

With the posting, Madonna would like to draw attention to her new album “Rebel Heart”
© Screenshot Instagram: madonna

To promote her new album, Madonna posted a picture of herself. Too bad that the picture didn’t show her own body, but the body of Amelia Goldie. A TikTok video of the young woman reveals the mishap – and goes viral.

It’s been six years now: On May 1, 2015, Madonna posted a picture on Instagram to promote her new album “Rebel Heart”. She is sitting on a bed, wearing a patterned skirt and a T-shirt that says “Joy Division”. She winks and grimaces.

When Amelia Goldie sees the picture, it looks very familiar. She later realizes that it is a picture of her. Madonna’s face and hair had been set on top of hers with an image editing program. Now, in March 2021, she shared a video about the incident on the TikTok social network, which received more than two million views in a very short time. Then the comments explode under Madonna’s Instagram post – because it’s still there.

I guess that’s a joke!

“I thought it was a joke at first,” the 28-year-old admits to BuzzFeed. However, she would have quickly realized that it wasn’t. It was finally posted on Madonna’s official account.

The young woman tried several times to reach Madonna’s team via Instagram. She would not have received an answer. In an interview with BuzzFeed, Amelia admits she’s honored, but wishes she’d been tagged, “I think if you pass off someone else’s body as your own, the person deserves to be mentioned.”

Amelia posted a video on TikTok describing the incident. She shows an old screenshot of the picture on Madonna’s account and then her own original – printed in a magazine. “Madonna stole my body” is the headline in teen magazine. The “Oh No” sound, popular on the platform, is playing in the background of the video.

Under the video, the young woman writes that she never thought she would say the phrase “If Madonna photoshopped her face on your body”. The 15-second video has already received more than two million views. In the roughly 4,000 comments there is one who even draws your attention: “I scrolled down until May 1, 2015 – it’s still there.”

The comments under Madonna’s posting are exploding

After the young Australian notices that the picture is still online, she posts a second video. You can see the picture and the comment of the user who drew her attention to it. Both videos together ensured that thousands of TikTok users switched apps and checked Madonna’s account for the picture themselves.

“I can’t believe it”, “Finally found it after ten minutes of scrolling”, “Why is it still online ?!” and “That’s not even well done”. Comments like this pile up beneath the singer’s six-year-old post. Very few users express concerns. One claims it is obvious that she is making fun of a fan-edited picture. Whether the icon edited the picture himself, commissioned it, or found it already edited on the Internet, only she can answer. It is unlikely that she will comment on this.

Minute of silence for Covid victims in European cities on Wednesday

British coronavirus mutation in Germany – those returning to travel bring...