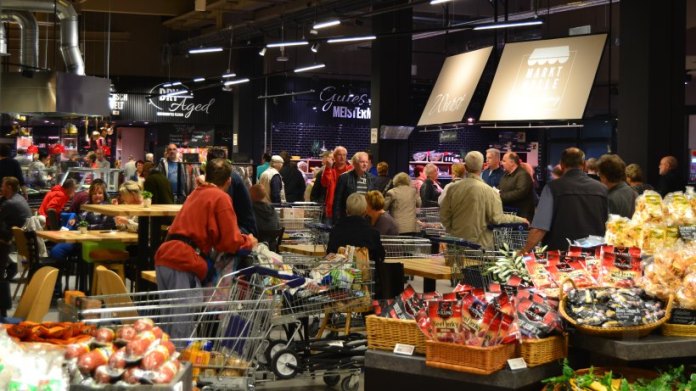 Braunschweig. Real will soon be history in Braunschweig. In the Markthalle the lights will go out soon. If only briefly.

The supermarket pulls out of the Markthalle Braunschweig back. Globus takes over the shop – and the employees.

Before the major renovation of the Braunschweig market hall, everything has to be removed. Therefore, Real is now luring customers to Otto-von-Guericke-Straße with a fat discount campaign.

The articles have been reduced in all product ranges, Real announced on Friday. Thousands of items are now available at bargain prices, including goods from the warehouse.

“Due to the exceptionally high discounts in our store, we expect that the offers, especially in the areas that are in high demand, will be sold out quickly,” says store manager Giovanni Rizzo.

At the same time, he thanks the customers for their loyalty and emphasizes that all corona protective measures will continue to be implemented in full. That is the top priority.

The market hall in Braunschweig will remain open until April 24th, including the catering. It is scheduled to reopen as Globus Markt on May 10th.

Corporate design, assortment, counters, shelf arrangement, technology, … everything should be adapted to the Globus concept, the company announced.

The good news: According to the company, the approximately 200 Real employees will be taken over by Globus. Rizzo is also pleased: “We can start with the familiar, well-rehearsed team in May under a new name.”

Braunschweig’s head of economic affairs, Gerold Leppa, was also pleased with this development: “This is very important news for the employees and their families, especially in these challenging times.”

Incidentally, the Globus in Braunschweig is the first hypermarket location in Lower Saxony. The focus should be on in-house production. According to its own statements, the company also wants to work with regional and local producers, suppliers and service providers.

Globus has taken over a total of 16 stores from Real, mainly in North Rhine-Westphalia and Saarland. Together with the location in Krefeld, the Braunschweig branch is starting the change of flag. (abr)

Diane Marstboom is dead: a Stuttgart performer with a great love...

Golden buzzer! SHE is sent directly to the final by...

12 facts about the iconic sketch

Coronavirus: German economy calls for the end of the lockdown before...

The record hunt continues: Bitcoin price climbs to 30,000 US dollars