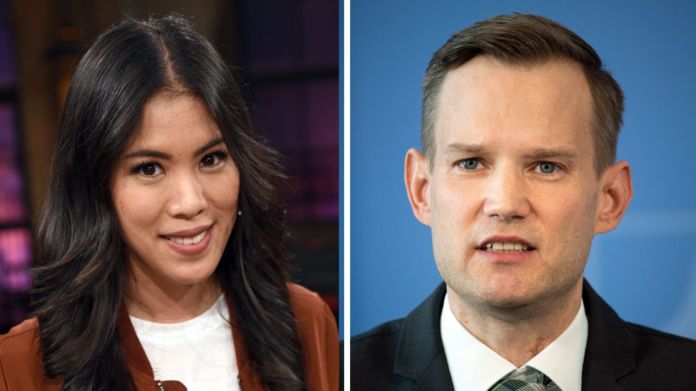 “Markus Lanz”
“Or are you possibly terribly naive?”: Journalist Nguyen-Kim hands out against virologist Streeck

He was annoyed during the Corona summit. Stephan Weil confesses. Mai Thi Nguyen-Kim is also annoyed. From the Heinsberg study. Or from Hendrick Streeck. Or both. Finally, she accuses the virologist of being “possibly terribly naive.”

Away with the uh-words. Lockdown, for example. Nobody wants to hear anymore. Simsalabim, the measure is now called “Easter rest”. Which doesn’t change the fact that more and more people are humiliating. No, that’s not spelled wrong. “Mütend” is a term that appeared in the most recent post by the emergency doctor “Doc Caro” – it means a mixture of tired and angry. And you, is it you too, Mr. Weil? Asks Markus Lanz on Tuesday evening.

The Prime Minister of Lower Saxony admits that he is annoyed. At least it was him a few hours ago, at the marathon conference of the federal and state governments. “I lacked the noticeable will to find other ways and means,” said Weil. The behavior of the federal government is disappointing. Nevertheless: the measures decided are inevitable. It is about “breaking the dynamic peak”. When asked why they wait until Easter, Weil replies that they want to use the “favor of the calendar” instead of shutting down a “normal week”.

And what to do with those who want to go on vacation? “You’d need a Gerhard Schröder,” suggests Lanz all of a sudden. “He would have known to prevent the flights to Mallorca.” For physician Stefan Kluge, vacation is “an unnecessary form of mobility”. His basic motto: “As little relaxation as possible.” Because: the British variant is still underestimated. There are indications that the virus mutation leads to the fact that those infected with it lie longer and the mortality rate is higher. In addition, the patients are now younger. At the University Hospital Hamburg-Eppendorf, for example, i.e. his place of work, the average age has dropped from 63 to 56 years.

Nguyen-Kim hands out against virologist Streeck at Markus Lanz

According to his argument, Kluge clearly belongs to the “Team Caution”. Yes, that is also a term that is now making its rounds. And with whom Hendrik Streeck doesn’t really know what to do with. “Who is the other team?” Asks the virologist – would that mean “carelessness”? Anyone who thinks this way does not understand “that we can only manage the pandemic as a team”. He refuses to contend that there are hard camps. “We all don’t want high numbers of infections and none of us want to provoke overcrowded intensive care units and none of us dead.” A lot of agitation and malice and camp division is happening in the media. Now the journalists Robin Alexander and Mai Thi Nguyen-Kim present could have used this comment to at least admit that the media are of course not close to the canonization either. But they don’t. Uh, yes, that is part of journalistic responsibility, and generally part of the responsibility of all of us to stand by what we cause.

This of course also applies to Hendrick Streeck himself. For months he has consistently rejected the fact that he allowed himself to be instrumentalized with the Heinsberg study carried out by him and his team. Nguyen-Kim doesn’t really want to believe him. “Or are you possibly terribly naive?” She asks at “Lanz”. Her advice to him: “If you feel so misunderstood, you should seek advice.” Since one likes to hand out. It seems to be seething in the Youtuberin. And she makes it clear that she has a big problem with the study: “You always said that there were seven deaths in the Heinsberg district at the time. And with this low mortality rate you argued for further openings. Now it comes out that there were 13 deaths. ”

She is addressing a ZDF documentary with Streeck in which the study was discussed. He in turn gives her to understand that then she probably wasn’t listening properly. And explains: “There were seven in Gangelt, 13 in the Heinsberg district. We meant Gangelt.” Nguyen-Kim does not want to get involved in this differentiation. “Gangelt, Heinsberg, talk your way out,” she accuses him. And so it goes back and forth. Even with the mutual attempt to interrupt one another. Moderator Lanz intervenes when Streeck interrupts Nguyen-Kim – and when it is the other way around, he lets the science journalist do it. What is unfavorable is that the dispute starts to get moving towards the end of the program and there is no more time to explain the situation in a clear and understandable manner. No wonder that Streeck finally sits there – it is literally written on his face – as if he had made another less than convincing experience with the media.

This is how you extend the range of electric cars in...