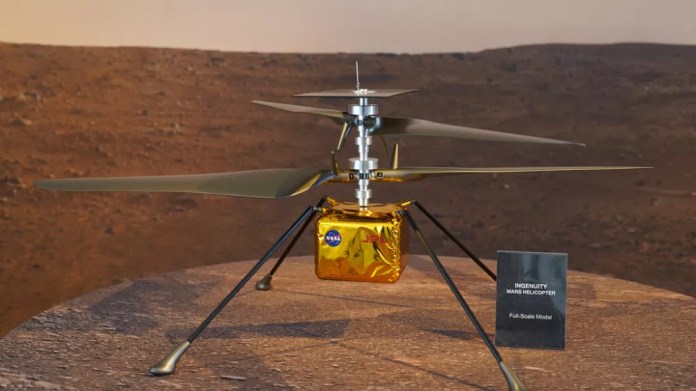 NASA has announced that it will launch the small helicopter “Ingenuity” on April 8th on Mars. The aircraft, a combination of drone and helicopter, has been on the Red Planet together with the Rover Perseverance since February 18.

One of the experts preparing the flight is Havard Grip, Ingenuity Chief Pilot. He says, “The flight itself will be a take-off, followed by an ascent to a height of three meters, then we will spin in place for about thirty seconds, during which the helicopter will rotate, then come down and land again.”

As soon as Perseverance has deposited the helicopter on the surface of Mars, the probe has to move away in order not to overshadow Ingenuity, which could cause problems at night temperatures of up to minus 90 degrees.

Farah Alibay, who is responsible for the interaction of the probe with the helicopter, explains: “The rover will drive back and occupy a so-called ‘lookout point’. Imagine a lookout point as if you were in a national park. You want to park there and That is what our rover will do, and its great view will be Ingenuity. ”

The important thing is not to drop Ingenuity. The mini helicopter has a twin propeller and weighs less than two kilograms; it cost $ 85 million to develop.

Multiple flights are expected over the course of a month, all of which aim to take high-resolution photos of the Martian surface.

Romania plans with up to 25 percent viewers

When do the schools open? Corona overview for all federal...