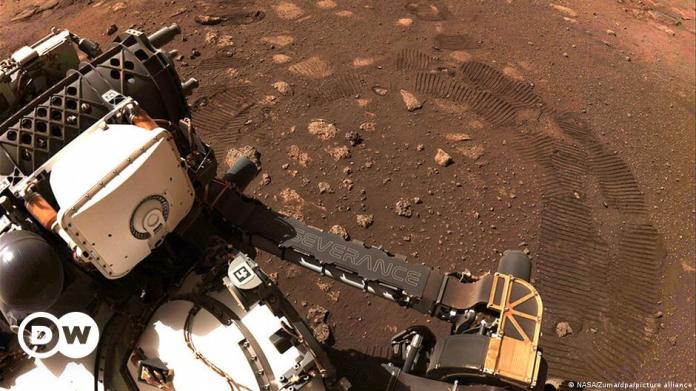 “Perseverance” (in German roughly staying power) drove four meters forward, turned 150 degrees to the left on the spot, and then drove back 2.5 meters, leaving tire tracks in the dust. Two weeks after landing on Mars, the six-wheeled US rover had set off on its first tour. “The rover’s six-wheel drive worked perfectly. I think I’ve never been so happy to see wheel tracks, and I’ve seen a lot of them,” said NASA engineer in charge, Anais Zarifian. “We are now confident that our propulsion system is operational and can take us wherever science takes us over the next two years.” For experiments, the Mars vehicle should cover distances of around 200 meters.
A camera on the rover took this picture

“Perseverance”, weighing around 1,000 kilograms and the size of a small car, is equipped with a three-meter long robotic arm and has 19 cameras, two microphones and a number of other state-of-the-art instruments. On February 18, after 203 days of flight and 472 million kilometers traveled, the rover touched down with a risky maneuver in a dry lake on Mars.

The rover will investigate this area with a diameter of around 45 kilometers over the next two years. Science wants to explore the climate and geology of Mars and look for traces of previous microbial life on the planet.

Jill Biden on criticism of doctoral degrees: “He called me ‘kid'”

Inbox: Palfinger – the agreement to dissolve the cross-shareholding is rated...