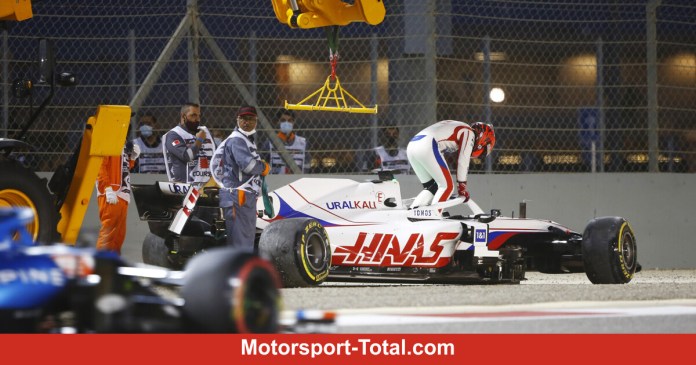 (Motorsport-Total.com) – Nikita Masepin’s Formula 1 debut was over after just a few corners. The Russian had an accident in the Grand Prix of Bahrain (Formula 1 2021 live in the ticker!) Through no fault of your own in turn 3. “It’s very easy [erklärt]. That was my mistake, “explains the rookie angrily.

“My tires were still cold, I hit the curb and gave too much gas. That made me spin,” said Masepin, describing the scene in the early stages of the race. He lost control of the Haas car and hit the gang with the right side of the car.

“That was completely my mistake,” emphasizes the newcomer. Already at the exit of turn 1 he had to bring a swerve under control. “I tried not to hit Mick because we were very close together. Then I had too much power and the tires couldn’t keep up.”

After a pretty good start, Masepin wanted to drive the outside line into Turn 1, so he was on the inside of Turn 2. “Mick was [außen] very close because he was driving on the faster line. So I was focused on not touching each other and then I just got onto the curb. “

Then he had no chance to intercept the car, he reports. Masepin has to admit that this is very disappointing. “I’m very sorry for the team because they deserved to do better. So I’m very angry with myself.”

Last night: The analysis of the Bahrain GP

Even before the race, team boss Günther Steiner stated that the top priority for his rookies was not to risk unnecessary accidents and to get the cars to the finish line as safely as possible. Team mate Mick Schumacher did not make it through the race without a mistake either.

The German also turned into the gravel shortly after Masepin, but was more lucky – he was able to resume the race. And in the end, Masepin can also gain something positive from his first Formula 1 racing weekend.

“The days on the track are very long, so I can learn a lot and gain experience. You also experience ups and downs – today is certainly one of the biggest lows. That may sound a little strange, but experiencing a whole race weekend was true a great learning experience in itself. “

Frankfurt shares: Dax & Co back in the red after records...

Is Austria blocking delivery of 100 million Pfizer cans to EU?

Innsbrucker Haie and Vienna Capitals are dueling for the fourth time...

Clear minus for Innsbruck Airport