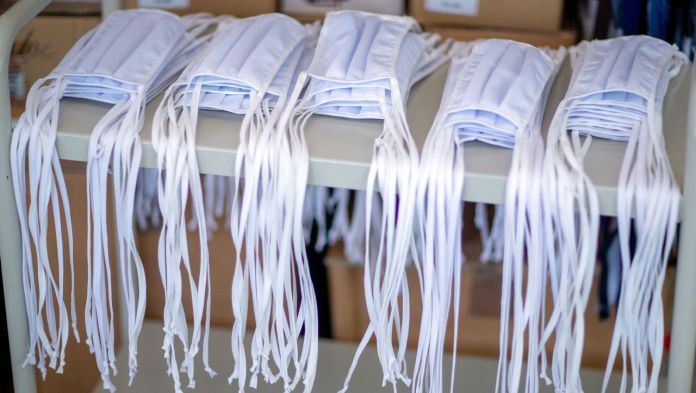 Union politicians are said to have received several million euros as a commission for arranging protective masks for ministries. The affair has been exposed – now the Munich Higher Regional Court has issued an arrest warrant against an accused at the request of the Munich Public Prosecutor’s Office. It was carried out on Thursday, said the investigating authority.
According to SPIEGEL information, the arrested person is said to be the CSU-affiliated entrepreneur Thomas Limberger. A Hessian company acted as a supplier for the mask deals in question, and Limberger apparently had initiated the deals. Commissions are said to have flowed through a company that is attributed to him (read more about the businessman here).
Georg Nüßlein, a member of the Bundestag who has since left the CSU, is said to have received a commission of 660,000 euros so that he can establish contacts between the company and the federal government and the Bavarian state government. Alfred Sauter, a member of the CSU state parliament for many years, who has since left the parliamentary group, is believed to have received around 1.2 million euros. Both politicians deny all allegations.
According to SPIEGEL information, there was a risk of flight against the suspect. According to the public prosecutor’s office, measures to secure assets have also been initiated “on a larger scale”.
In the mask affair, the attorney general’s office had recently expanded its investigation to five suspects. The scandal over commission payments in mask business and lobbying activities had hit the CDU and CSU violently in the past few weeks. With an internal code of conduct, the Union parliamentary group wants to prevent renewed scandals due to dubious business dealings by their MPs. A corresponding key issues paper is already available.
As a consequence of the affair, the Union and the SPD also want to tighten the law on representatives. The Union parliamentary group wants, among other things, to prohibit paid work as a representative for a third party vis-à-vis the federal government or in the Bundestag and to impose a fine on violations. Members of parliament should in future have to specify their additional earnings from 100,000 euros to the nearest cent.

As a result of the affairs surrounding the mask deals and dubious contacts abroad, three other politicians are no longer members of the Union parliamentary group and the Bundestag, in addition to Nüßlein. These are Nikolas Löbel and Mark Hauptmann (both CDU) and Tobias Zech (CSU).

Because of security deficiencies: “Meineimpfungen.ch has to go offline” – data...

The British are tightening their tone: Why the euro is giving...

Debate about language and racism: can a village be called “negro”?

Cyberpunk 2077: When the preload starts, when you can play