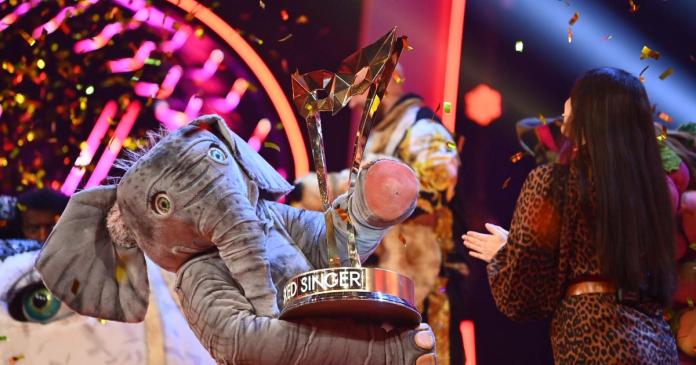 The baby elephant prevailed against the Danube nymph and the gelse in the final.

Sandra Pires won the second season of “The Masked Singer Austria” on Puls 4 as “Babyelefant”.

The singer-songwriter was the last to reveal her well-guarded identity on Monday evening. Before that, actor Jakob Seeböck was exposed as “Gelse” and actress Edita Malovcic as “Danube nymph”.

“It was an incredible journey, I learned so much,” said Pires happily. In the course of the six shows, the costume became a friend for her, although she was claustrophobic all her life.

“I couldn’t pull anything over my head either,” revealed the singer. After a period of getting used to it, however, she romped around the stage on all fours.

Last year’s winner Nadine Beiler presented her with the trophy at the end of the show. Pires had difficulty holding the trophy with the bulky elephant costume feet. Fortunately, presenter Miriam Weichselbraun was quickly on the spot.

2nd place for the Danube Nymph

Second place went to “Danube Nymph” Edita Malovcic. The Austrian actress and singer had already “put her musical career to the side”, as she confessed.

“The Masked Singer Austria” set them on fire again. “I am very motivated to continue now,” said Malovcic after her exposure. The revelation for the advice panel was not a big surprise: three out of four were correct with their final tips.

3rd place to the Gelse

Third place went to the Austrian actor Jakob Seeböck. The name of the “Soko Kitzbühel” commissioner was never mentioned during the second season of the show. “I took on a long-awaited film role as a rock star,” said Seeböck.

He took the lead singer of the rock band Aerosmith, Steven Tyler, as a role model. He was able to gain experience as a performer a year ago at his wife’s birthday party. He presented three numbers at the time. “I got good feedback,” smirked the actor.

The audience numbers were largely constant for the first five shows. The first episode was followed by an average of 214,000 viewers (12+), the second 242,000. For the semifinals a week ago, an average of 240,000 people turned on their televisions. Erdogan’s loss of reality: Why almost every second Turk wants to...

Amazon switches off Parler online service that is used by rights

Ski World Cup: The path to gold leads through Kriechmayr