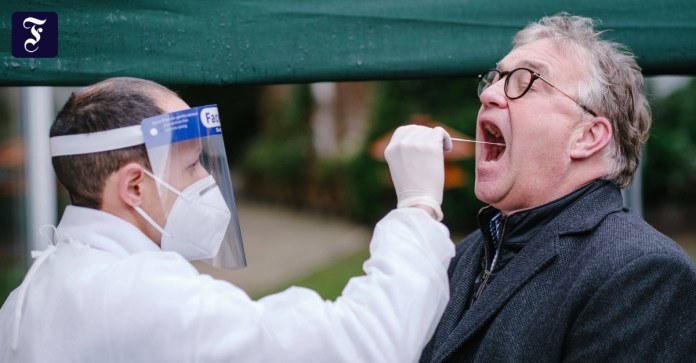 PPoliticians and scientists assume that the incidence rate will rise if self-tests are carried out in the millions in Germany. The value that is important for openings would then no longer be comparable with previous values. The Prime Minister of Baden-Württemberg, Winfried Kretschmann, expects the measured incidence rate to increase as a result of the testing. “If we test en masse now, we will of course find more infections – and illuminate the number of unreported cases. But that is also desirable. You can only come down with the numbers faster if you detect more infections and can also track them. That is the advantage ”, said Kretschmann in an interview with the FAS There is therefore“ a huge buffer ”in the opening plan of the federal and state governments. There, incidence rates of 50 or 100 decide on the measures.

Editor in politics of the Frankfurter Allgemeine Sonntagszeitung.

Editor in politics of the Frankfurter Allgemeine Sonntagszeitung

The Berlin physicist Kai Nagel, who is investigating the pandemic for the federal government in model calculations, also expects an increase. “With rapid tests, the incidence values ​​would probably rise again for the time being. In general, however, the goal should be to further reduce the incidence of infections, and the tests tend to accelerate this, “said Nagel of the FAS. The incidence value would rise because many infections are detected and then fall because more infected people were quarantined and fewer infected.

For the virologist Hendrick Streeck, politicians look too closely at the incidence rate. “Openings must be linked to a defined test strategy, but you have to be aware that with more tests, the number of infections will probably also automatically increase because more infections are discovered”, said Streeck of the FAS

“Also because the basis for the recorded data has changed again and again, I have been advocating since the summer that a single indicator should not be decisive for decisions. The hospitalization rate could also be included, for example. “

The SPD member and epidemiologist Karl Lauterbach also believes that it is possible that the rapid tests falsify the incidence value downwards. “The incidence rate can go in any direction. It can also be sinking. If someone has a positive self-test from the supermarket and wants to avoid quarantine, they could do without a PCR test and self-isolate. Then it would not be counted in the statistics. ”In this way, the state would not find out about the infection. Lauterbach is therefore under supervision for rapid tests in companies, schools or centers. “Then it would be ensured that a PCR test is carried out after a positive rapid test,” he told the FAS

In the municipalities, the threatening patchwork of counties with different lockdown rules is causing criticism. The Mayor of Freiburg, Martin Horn, has an incidence value of less than 50 and is therefore aiming to relax the situation. Counties in the surrounding area have higher incidence rates. Horn criticizes the fact that the gradation of the measures according to urban and rural districts “bypasses the reality of people’s lives”. Instead of a “patchwork quilt”, regional concepts are needed. The city of Kaiserslautern, which has a low incidence, also announced that it “does not make sense” to take any opening steps earlier than the surrounding area. Should there be a shopping tourism, one will “readjust”.

The Mayor of Leipzig and President of the German Association of Cities, Burkhard Jung from the SPD, expressed a similar opinion: “In order to avoid ‘opening-up tourism’, joint precautions are needed between countries, but also between cities and districts,” he told the FAS Jung expected from the Federal government that it provides sufficient test kits. “We cannot call for tests on Monday and then say on Wednesday lunchtime: We will no longer test because we have run out of test kits.”

In the future, employers should provide their employees with quick tests on a weekly basis. The President of the Federation of German Industries, Siegfried Russwurm, complained that “crucial questions for the federal government” are still open, for example where companies can get the tests and whether they should and are allowed to report the test results to the health department. The federal government postponed a meeting with representatives of employers and employees planned for last Friday for a few days.

The employers’ association of insurance companies in Germany rejects a statutory test obligation for companies – also because the offices of the industry are empty. “In the insurance industry, the topic of testing currently has no measurable relevance, since between eighty and ninety percent of the workforce works from home,” said Michael Gold, the association’s managing director. The car manufacturer Volkswagen already has experience with 27,000 PCR tests that have been carried out on employees since August. Rapid tests were also done. The group is satisfied. The incidence values ​​of the Volkswagen plants were each “well below the level of the surrounding regions,” said a spokesman.

Rules and prohibitions for Lower Saxony and Bremen

Corona pandemic in Europe: Austria goes into the 3rd lockdown, at...

First Dates Hotel: Siblings are looking for love – one night...