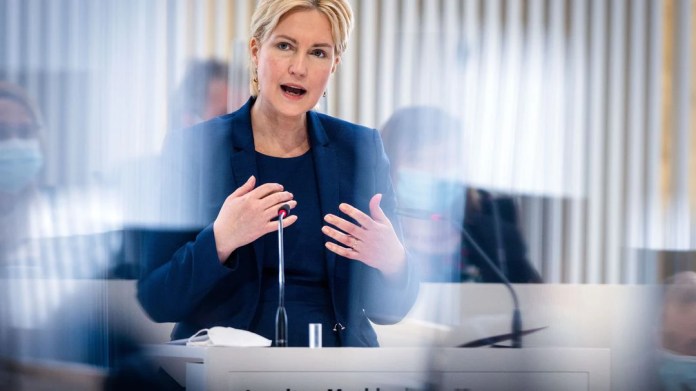 Schwerin. With a massive expansion of the obligation to test, Mecklenburg-Western Pomerania wants to try to keep the previous opening steps despite the increasing number of corona infections. From next Wednesday, for example, visiting the hairdresser should only be possible with a negative corona rapid test. From Tuesday after Easter (April 6th), a negative test must also be shown when shopping, as Prime Minister Manuela Schwesig (SPD) said on the Saturday after the MV summit.

At the two-day video conference, the state government, together with representatives from business, trade unions, municipalities and associations, discussed a way for the state through the third corona wave.

Closures at incidences over 150

Further opening steps are not possible, Schwesig clarified with a view to the extremely dynamic corona development. In the past seven days, the nationwide incidence rate rose from 69 to 103, she said. Four districts are over 100: Ludwigslust-Parchim, Northwest Mecklenburg, Mecklenburg Lake District and Vorpommern-Greifswald. There will be a night curfew from 9:00 p.m. to 6:00 a.m. if the local authorities estimate that the incidence is due to a diffuse infection.

In regions in the state with a seven-day incidence of more than 150 new infections per 100,000 inhabitants, additional restrictions should apply. These include closings of zoos, animal parks, museums and driving schools.

With the obligation to test when shopping, the state government hopes to be able to keep the openings that have been made so far despite the current increase in the number of infections. To this end, the network is to be expanded to include places for the free “citizen tests” that every resident is entitled to once a week.

According to Health Minister Harry Glawe (CDU), there are currently around 140 test sites, including 106 pharmacies. The country plans to order another two million rapid tests next week. In addition, work is being done to ensure that negative test results at the workplace can also be used for shopping or visiting the hairdresser.

Glawe also announced that vaccination appointments can also be made online after Easter. So far this was only possible by phone.

Launch in the UK: This man is one of the first...

The call of the euro comes from the west