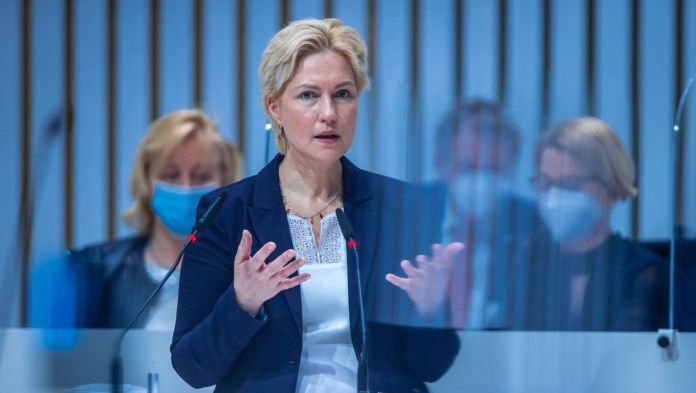 In view of the sharp increase in the number of infections, the corona measures in Mecklenburg-Western Pomerania are being tightened. In regions with a seven-day incidence of more than 100, nocturnal exit restrictions will be possible in the future. If the corona infections are classified as locally indefinable, exit restrictions are to be introduced there from 9 p.m. to 6 a.m., as Prime Minister Manuela Schwesig (SPD) announced in Schwerin on Saturday.
In regions in the state with a seven-day incidence of more than 150 new infections per 100,000 inhabitants, additional restrictions should apply. These include closings of zoos, animal parks, museums and driving schools, as can be seen from the decision paper of the state corona summit.

Shop only with a negative rapid test

From next Wednesday onwards, visiting the hairdresser will only be possible with a negative corona rapid test. From April 6th, a negative test has to be shown when shopping, as Schwesig explained. In Rostock this should only apply from April 10th. This is where the seven-day incidence is lowest in the country.

The number of new corona infections has risen sharply this week in Mecklenburg-Western Pomerania. More than 300 new infections were recently reported on several days. The nationwide incidence value climbed to more than 100. In the meantime, none of the two independent cities or none of the six rural districts are below the important threshold of 50.

Despite the poor numbers, the federal and state governments decided at the Prime Minister’s Conference at the beginning of the week that the states in “selected regions” may open individual areas of public life on a trial basis in “temporary model projects”. Chancellor Merkel canceled the “Easter rest” initially announced because it seemed hardly feasible.

SPD health expert Karl Lauterbach and Minister of Health Jens Spahn (CDU) pleaded for a harder lockdown on Saturday. “If we take the numbers, including the developments today, we actually need another 10 or 14 days at least to properly shut down our contacts, our mobility,” said Spahn at an online discussion event organized by the federal government.
A lockdown is necessary, similar to that at Easter last year, Spahn continued. He himself would prefer to spend Easter with a larger family. “But it won’t work this year.” If this wave can be broken before it gets too big in April, then opening steps are also possible afterwards. He appealed to the citizens “in case of doubt, to implement more than the state rules”.

Raid on Islamist scene in Berlin

“The Geissens” – Robert Geiss buys and puffs cannabis cigars in...