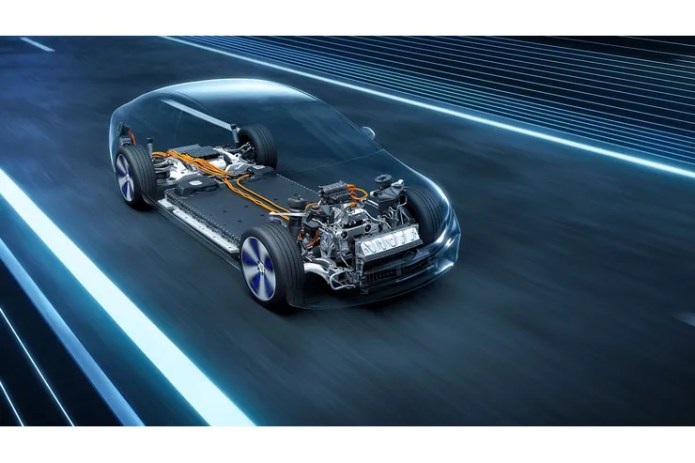 Mercedes is planning the luxury electric car in the form of a four-door coupé for the spring of 2021. It should set standards in terms of efficiency and range and will be given a huge battery. Impressions from the EQS testing on the Mercedes test site in Immendingen and Mercedes own pictures.

The abbreviation EQS reveals the positioning as an S-Class with electric drive. Michael Kelz, chief developer of the EQC series at Mercedes among other things, specified the brand’s electric plans: “We will have an electric car that is undoubtedly on par with an S-Class, but it will not be an S-Class”. The car will be luxurious and the top model in the EQ series. At the IAA 2019, Mercedes presented the EQS as a concept car that we were already able to drive.

The Mercedes EQS receives the new “Digital Light” that Daimler presented at the IAA.

In contrast to the EQC, the Mercedes EQS is based on the brand’s new modular electrical architecture (MEA) – internal EVA II. Thanks to a new lithium-ion battery and its streamlined coupé body, the frontal area of ​​which is much smaller than that of an SUV, the EQS should even travel 700 kilometers (WLTP) with a full battery. The battery in the vehicle floor with up to 108 kWh between the front and rear axles comes from the Daimler factory in Hedelfingen, the lithium-ion cells are supplied by the Chinese supplier CATL. A total of twelve cell modules are housed together with the power electronics in the EE compartment, i.e. the battery unit. The battery contains nickel, cobalt and manganese in a ratio of 8: 1: 1 – the use of cobalt has been reduced by around ten percent. The modular battery system also allows other capacity levels from around 90 kWh with correspondingly lower ranges. By the way: The Mercedes EQS can also be brought up to date via over-the-air updates (OTA).

The performance of the electric S-Class will surely be above the 408 hp and 765 Nm of the EQC. With the electric drive, the EQS will get an intelligent all-wheel drive, at least optionally.

In our first Erlkönig pictures, the Mercedes EQS already has significantly less camouflage on the rear. It is now clearly recognizable: The EQS has a large tailgate that encloses the rear window and extends into the roof. Otherwise the tail runs out flat to the tail rump. The coupé-like roof shape and the flat windshield are very easy to recognize. The four-door model has a slightly curved lower window line, the exterior mirrors are on the door sill.

The very pointed windows are eye-catching. Like the S-Class, the EQS has retractable door handles as well as normal door handles. The panes in the doors are frameless. The short overhang at the front gives the sedan even more length. The narrow headlights peeking out from under the camouflage extend far into the fender. Overall, the nose of the EQS starts very low and then rises almost seamlessly over the bonnet to the large glass panorama roof. The front hood itself shows a deep indentation, possibly as an outlet for a front mask with air flow.

Yes, because it is more modern and emotional.

No, far too polarizing for an S-Class.

The latest Erlkönig pictures also show the interior for the first time. The driver grabs a three-spoke steering wheel with a small impact absorber. The valance is known from other series – as are the steering wheel levers. A fully digital cockpit is almost vertical and without “shielding” on the dashboard. This houses a touchscreen inclined towards the driver in the middle. Like the cockpit, it has a chrome frame and is roughly the size of the S-Class screen. In the top OLED version, this measures 12.8 inches diagonally. For operation, only the hand needs to be brought closer, the operating icons are then aimed at the user. Four cameras in the interior make this possible.

Otherwise, the EQS should also have the technical innovations of the S-Class – i.e. the modified pre-safe system, the e-body control system for chassis adjustment and driver assistance systems that support driving, braking and parking – or some of them take over yourself.

The Mercedes EQS is built in Sindelfingen in the new Factory 56, while the EQC rolls off the assembly line in Bremen. Mercedes produces the EQA in Rastatt. Mercedes also wants to offer a large luxury SUV in addition to the EQS. The Smart ED, which will be offered as Fortwo and Forfour from 2020 exclusively with electric drive, is also part of the EQ series. Daimler will invest more than ten billion euros in electromobility by 2022. By then, all Mercedes vehicles should be electrified, ten of them purely electric cars.

The electric GLC (EQC) is not only followed by Stromer on a GLA (EQA) and GLB basis (EQB), but also by a BEV in the S-Class format as an EQS. A sedan in E-Class format and a large SUV (G-Class) are also in the works. The latter are based on a special electrical architecture that takes advantage of all the packaging advantages of the new drive, while the EQC is based on the combustion platform of the GLC, the EQA and EQB are based on the A-class architecture MFA II. In terms of battery size, the EQS top version is record-breaking – at least until Tesla launches the Model S Plaid, which will probably have at least 120 kWh.

Daley Sinkgraven is also out – defensive problems for Peter Bosz

Thanks to Corona, energy consumption in Germany fell to an all-time...

Perfumery or drugstore? – How Douglas tricked the lockdown