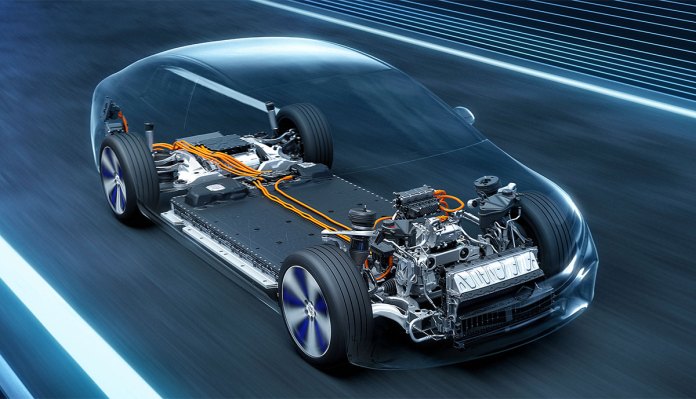 Mercedes-Benz recently announced that it would be launching its new electric car flagship EQS in August. The world premiere of the luxury sedan, which is moving on a new platform, will be celebrated on April 15th, it was now said. Details of the battery used were announced in advance.

The electric cars already introduced by Mercedes are based on architectures developed for internal combustion engines. The EQS introduces the new EVA2 (Electric Vehicle Architecture) platform, which allows better integration of the electrical components, including the battery. For the EQS, among other things, a new record is promised in terms of range. To achieve this, Mercedes is using the largest battery ever installed in one of its electric cars.

The long range of the EQS is due to a “highly efficient” drive train and advances in the energy density of the battery, according to the developers. The EQS is optionally equipped with modular battery layouts that enable different ranges and performance ranges. With a usable energy content of up to 108 kWh and supported by “first-class aerodynamics”, the EQS achieves ranges of more than 700 kilometers in accordance with the realistic WLTP standard. The gross battery content with retained reserves was not disclosed.

The in-house developed software enables updates “over-the-air” with the cellular network in order to keep the energy management of the EQS up to date over its service life. The cell chemistry of the EQS battery contains nickel, cobalt and manganese in a ratio of 8: 1: 1. This reduces the cobalt content to around ten percent. More details about the EQS electricity storage system have not been published. However, Mercedes emphasizes the CO2-neutral production of the battery cells. However, the Swabians themselves only manufacture the battery packs for their electric cars; the cells bundled in them are ordered from suppliers in Asia.

The production of the batteries for the EQS started this month; they are being built at the Hedelfingen plant, part of the Mercedes location in Stuttgart-Untertürkheim. In 2022, all of the brand’s own car and van plants, including the Hedelfingen plant, are expected to produce CO2-neutrally. Like its individual battery cells, the EQS is already being built in a CO2-neutral manner; production takes place together with the new S-Class in “Factory 56” at the Sindelfingen plant.

The battery systems for the EQE sedan following the EQS in the E-Class segment will also be built in the Hedelfingen plant section. SUV versions are also planned for both models. The Hedelfingen battery factory has state-of-the-art systems and uses Industry 4.0 technologies, explains Mercedes. The production of the “highly complex” lithium-ion batteries takes place on a production line around 300 meters long with more than 70 production stations and a large number of automated and manual production steps. A large number of components, including up to 12 cell modules and the so-called EE compartment for the intelligent integration of the power electronics, which is assembled at the Mercedes location in Berlin, would be combined to form an overall system in Hedelfingen.

“We are pressing ahead with our electric offensive at full speed and are underpinning our overarching goal of CO2 neutrality. Our next fully electric model – the EQS luxury sedan – is based on its own electric platform and is already in the starting blocks. The start of production of its high-performance battery systems in our traditional plant in Hedelfingen is therefore an important milestone, ”says Daimler Research Director Markus Schäfer. “In the course of the transformation of our company and our products, we are significantly expanding our battery competencies across the entire value chain and will help the next generation of batteries achieve a breakthrough even faster.”

UNO is still waiting for signs of life from Princess Latifa

Forklift flings across the A5

His ex-manager now looks after this hit star 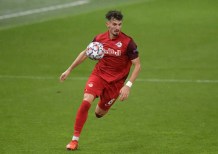