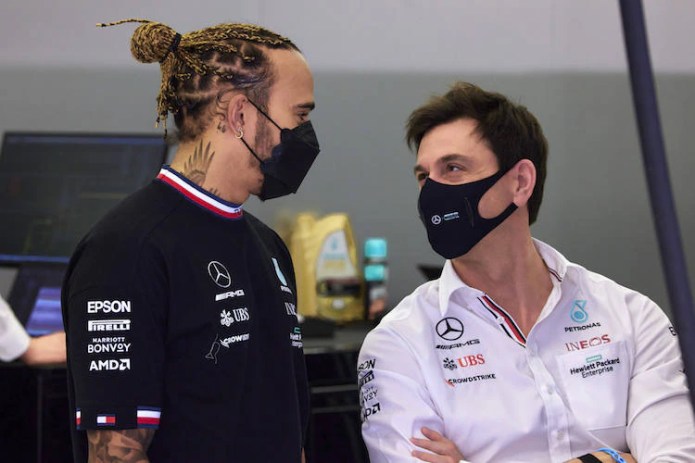 Red Bull Racing-Honda had the fastest car in Bahrain with Max Verstappen, but Lewis Hamilton won the World Championship opener with Mercedes. Toto Wolff: “I’m confused by the behavior of the race management.”

For Mercedes team boss Toto Wolff, the final minutes of the Bahrain GP turned into hours. The Viennese sat on pins and needles, while on the racetrack Lewis Hamilton had to dig deep into his bag of tricks to keep the strong Verstappen behind him.

Let’s be honest: Isn’t Toto Wolff a little surprised that Mercedes won despite all expectations? Toto: “If someone had told me before the weekend that we would be in first and third place, then I would hardly have believed him. But we worked our way out of the difficulties of the test drives. With the caveat that we are pretty much behind, especially in qualifying speed. But we were competitive in the race. “

“I guess that was firstly a strategy victory and secondly a brilliant performance by Lewis Hamilton and thirdly good will from the god of racing. We decided to take the courageous approach to stop early and take the lead, knowing full well how difficult it is to overtake on this track. “

“Now we have to find out why we lose so much time in the qualifying trim but have a really good car in the race. And a considerably better one than in the endurance runs in training. “

Keeping to the slopes is one of the hottest topics after the start of the season. In qualifying the situation was clear: if you overdo it in Turn 4 and get off the track with all four wheels, the time will be canceled and that’s that.

During the race you could see some drivers laying out the ideal line in Turn 4 very, let’s say generously, but suddenly there seemed to be a warning from the race management, which Mercedes passed on to Lewis Hamilton. He grumbled on the radio: “But I’ve been driving like this the whole time.” With which the Englishman had secured a not inconsiderable time advantage.

When Max Verstappen then attacked Hamilton and his car was carried too far out in turn 4, the Dutchman had to give up his position.

Toto Wolff admits: “I’m confused. Because before the race it was said that there would be no penalties if the car was carried out into turn 4. Then all of a sudden, during the World Cup, the message came – if that were to be done further, it would be regarded as gaining an unauthorized advantage and would be punished. We discussed this with the race management, but had to bend over. Of course, we don’t have the last word. But in the end it was that decision that brought us victory. Because Max had to give up the position after his attack. I think: we need clear announcements in the future and not a Shakespeare novel. ”

Conclusion by Toto Wolff: “Red Bull Racing wasn’t the strongest team at the beginning of the season in recent years, and they often had a hard time in Bahrain. Now they have the best car. I am convinced that it will be very difficult for us to wrestle them down over a whole season. “

Corona lockdown: Bavaria is rushing forward – what tightening other countries...

Rare event – Jupiter and Saturn as close together as rarely

Jens Spahn announces vaccination offer for all Germans in the summer

AfD has lost a lot of approval in the survey –...