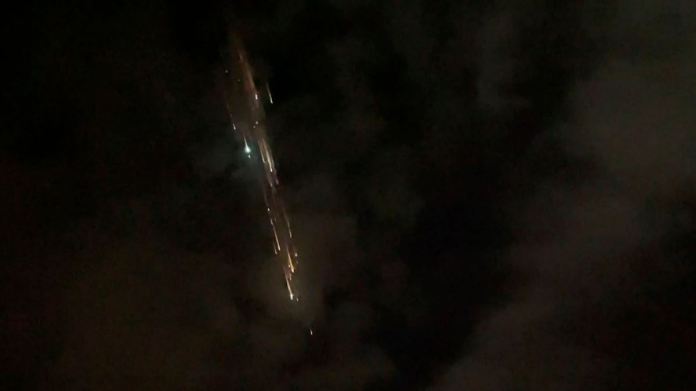 A glowing rain of glowing objects shines in the sky over the northwestern United States. The origin of the phenomenon is puzzled over in social networks. An expert can explain the phenomenon: Behind it is the space company SpaceX of US billionaire Elon Musk.
Mysterious, meteor-like objects in the sky have amazed and fascinated the Northwest of the USA, from Portland to Seattle. While some people suspected a meteor late Thursday evening, the jet of fire was the debris from the SpaceX company’s Falcon 9 rocket. This was reported by the local television station “Katu”, which is connected to the US broadcaster ABC.

The second stage of the company’s rocket from billionaire entrepreneur Elon Musk did not burn as planned, said astronomer Jonathan McDowell. The SpaceX rocket was launched at the beginning of the month, and the space debris it dropped then circled the globe for 22 days.

The space debris was actually supposed to reenter the atmosphere shortly after take-off – SpaceX did not explain why that didn’t happen, according to the Harvard University researcher. The experts noticed the re-entry, but the calculation is not that easy due to the rapid speed.

“We knew it was going to happen, but we couldn’t predict it would be Seattle. It’s the main cause of people’s amazement,” said McDowell. Because of the speed of around 27,000 kilometers per hour, the space projectile could easily land at the other end of the world if the experts only miscalculate slightly. The astronomer added that such re-entries are not uncommon. “Something like that happens somewhere in the world about once a week.”

For the people of Oregon and Washington, however, it was a once-in-a-lifetime experience, as many stunned Twitter posts testify. “I’ve never seen anything so incredible in my life,” wrote one user.

Perttu Lindgren will no longer appear for HC Davos with immediate...

BSR is supposed to clean up even more Berlin parks

Right-wing extremists in Austria and Germany: trace to NRW