In the first practice session, he only left his team-mate behind, then also a competitor: Mick Schumacher slowly got going on Friday. And on Saturday, too, the young German driver was on a solid track.

Max Verstappen also set the fastest lap in the last free practice session before qualifying for the season opener race in Formula 1. The 23-year-old Dutchman relegated world champion Lewis Hamilton to second place on Saturday in the almost 40 degree hot desert of Sakhir. Verstappen needed a whopping 0.739 seconds less than the seven-time champion in a Mercedes for the 5.412-kilometer Bahrain International Circuit. Pierre Gasly from France came third in the Alpha Tauri.

Sebastian Vettel did not make it into the top ten in the Aston Martin like the day before in both units and ended up in 14th place, more than two seconds behind, while the Heppenheimer struggled with slight problems with his car. In a curve, a small part of the bolide apparently broke off and hit Vettel on the helmet.

Mick Schumacher will be a little more satisfied. The Haas driver prevailed again against Nikita Masepin in the team-internal duel. Nevertheless, it was only enough for 18th place in the weak car of the US team. Last was the Canadian Latifi in the Williams car.

Series: My Corona year (2): A time of discovery and leisure...

E-mail and calendar: Zoom is preparing for the end of the... 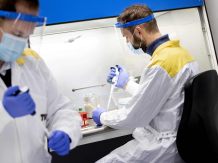