Otto Wilde’s fan base is large. So big that, according to the company, a strategic partner is needed to help with production. The choice fell on Miele.

The home appliance manufacturer Miele bought the recipe app Kptncook just a month ago. Now the medium-sized company is taking over the next food startup: Otto Wilde from Düsseldorf. Miele has acquired 75.1 percent of the family business, the stake of the business angel and a few percent of the Wilde family. The remaining shares belong to the founding team around Otto Wilde, son Nils, daughter-in-law Julia and family friend Alexander Luik. They previously held a total of 70 percent.

When asked by the start-up scene, Luik does not want to reveal how much Miele paid for the almost six-year-old grill manufacturer. Just this much: Otto Wilde received orders worth tens of millions in 2020 alone. In the summer it was said that Otto Wilde was aiming for eight-digit sales for the first time. The rating should also be eight digits.

“Our business is extremely capital-intensive”

In June 2020, the Düsseldorf start-up concluded crowdfunding of just under 4.5 million euros. The campaign should not only stir the drum, but also finance the production of the latest model.

Otto Wilde has loyal customers, and within one day the crowd supported the startup with 1.5 million euros. A grill costs at least 1,000 euros. According to Luik, the demand is high despite the price. Otto Wilde was not able to finance and organize the production from his own resources. “Our business is extremely capital intensive. Due to the high cost structure, we have to purchase relatively large quantities, ”said Luik in the summer.

After the successful crowdfunding, the startup received several inquiries from companies that wanted to invest in Otto Wilde. Miele has also shown interest and was ultimately awarded the contract. The managing directors Luik and Nils Wilde as well as the 30 employees will remain after the takeover. The Düsseldorf team want to expand their team soon. 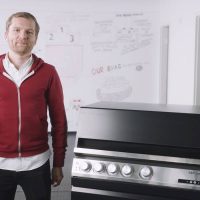 Luxury barbecue crowdfunding: “We don’t earn much from the appliances”

Soon also with Plex content in the live tab

Jessica Walter is dead: tribute to the grande dame of manipulation

When chemotherapy is effective for bladder cancer | Health city...