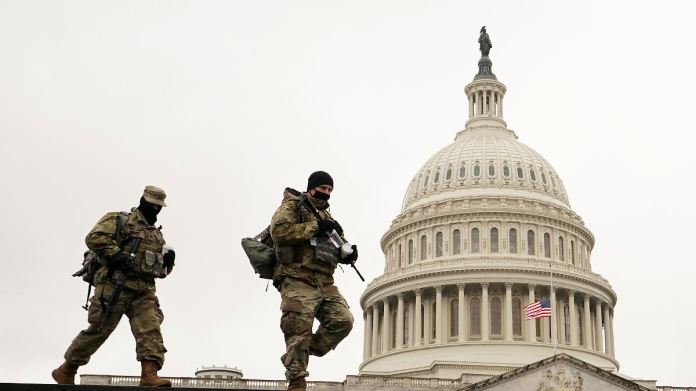 The storm on the Capitol in Washington marks the low point in the Trump era and a blow to democracy in the USA. Secret services are now assuming another attack. The plans date to a day related to the elected US president.
The US authorities have uncovered possible plans by extremists for a new attack on the US Capitol this Thursday. “We have received intelligence that shows possible plans by an identified militia to break into the Capitol on Thursday, March 4th,” said Capitol Police in Washington. The police are prepared for possible threats “against members of Congress or against the Capitol complex”.

The night before, the Capitol police had announced that they had tightened security precautions and increased the number of officers deployed around Thursday. Reason are “worrying information and intelligence knowledge”.

Fears of renewed violence on March 4th have been around for weeks, but it was unclear how specific the threat is. Supporters of the far-right conspiracy movement QAnon assume that the elected President Donald Trump will be sworn in for a second term on Thursday. March 4th was the day US presidents took their oath of office until 1933. The date was then set for January 20th.

Radical Trump supporters stormed the Capitol on January 6th. On that day, Parliament should finally confirm Joe Biden’s victory in the presidential election on November 3rd. Members of several right-wing extremist groups such as the Proud Boys and the Oath Keepers were involved in the attack, which left five dead. The Capitol was massively secured in preparation for Biden’s inauguration on January 20. The parliament complex was cordoned off extensively with a high fence, and thousands of national guards were dispatched.

Last week, the acting chief of the Capitol Police Department, Yogananda Pittman, warned at a congressional hearing against scaling back security. Extremists would like to “blow up the Capitol and kill as many parliamentarians as possible”. Biden’s first State of the Union address was cited as a possible reason for an attack. A date for this so-called State of the Union Address has not yet been set.

Sebastian Kurz: “We’re not waiting” – government is increasing the pace...

Vaccination in Germany: Allianz and Deutsche Telekom want to vaccinate their...

Well, what was that against Rome ?: Borussia Dortmund is frustrated...