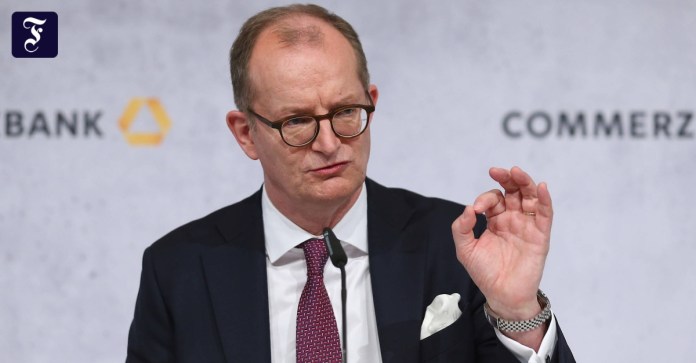 Dhe report in July came as a surprise and dealt a double blow to the already chronically troubled Commerzbank. Both the chairman of the board, Martin Zielke, and the chairman of the supervisory board, Stefan Schmittmann, announced their resignation. This was preceded by serious allegations by the major investor Cerberus about the continued unsuccessfulness of the top management and finally the lack of support from the federal government, which has a 15 percent stake in the bank. While Schmittmann left immediately, Zielke continued until a successor was found for him – and received a generous severance payment, according to the bank’s compensation report published on Wednesday.

“For the period from January 1, 2021, Martin Zielke will receive a total gross amount of 3,348,480 euros, which will be paid in 24 monthly installments,” it says neatly. And it is further stated there that this amount is still far below the actually possible maximum amount because Zielke has waived the offsetting of possible variable remuneration claims and other ancillary services.

In the workforce of the bank, which has been on a permanent austerity course since the financial crisis, the amount of the severance payment is likely to encounter incomprehension. Several thousand jobs are currently being cut and almost half of the branches are to be closed forever. And the shareholders, who not only have to accept high price losses, but have also had to forego dividends for years, are unlikely to be pleased with the golden handshake.

After all, according to its annual report, the bank is again anticipating a net loss for the current financial year, albeit a significantly lower one than last year. For 2020, Zielke’s successor, Manfred Knof, reported a net loss of 2.9 billion euros due to high renovation costs, goodwill amortization and significantly increased risk provisioning.